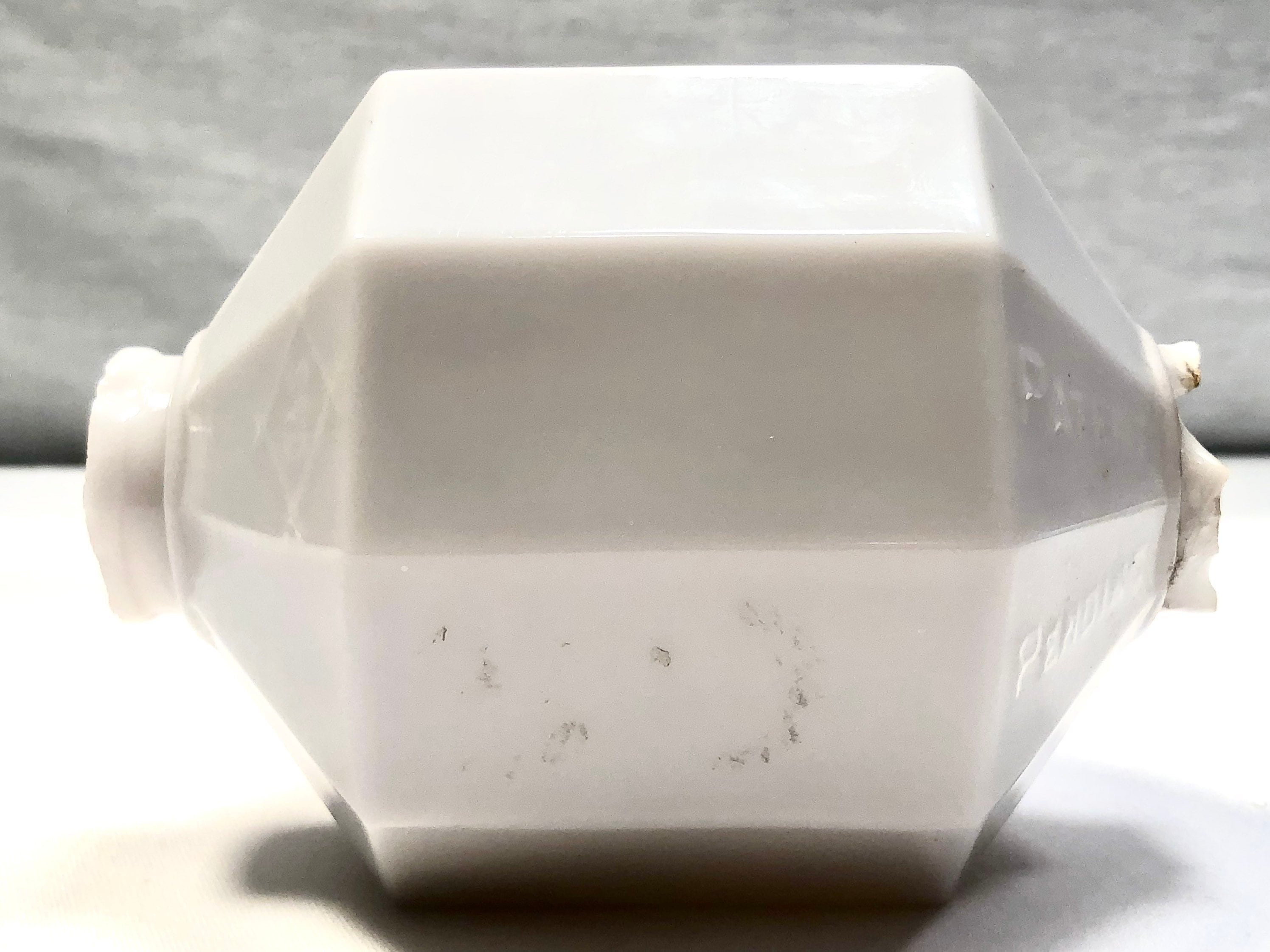 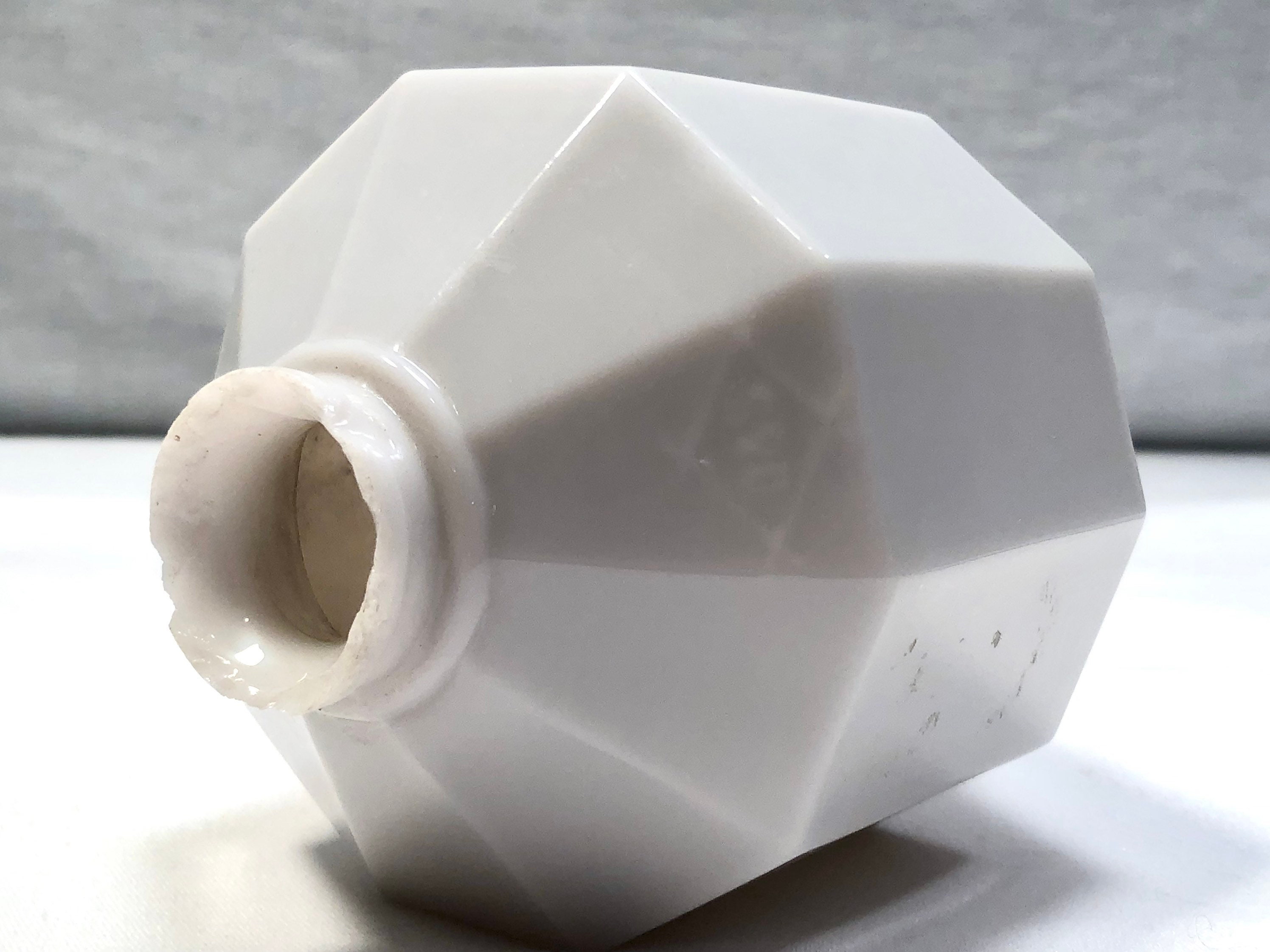 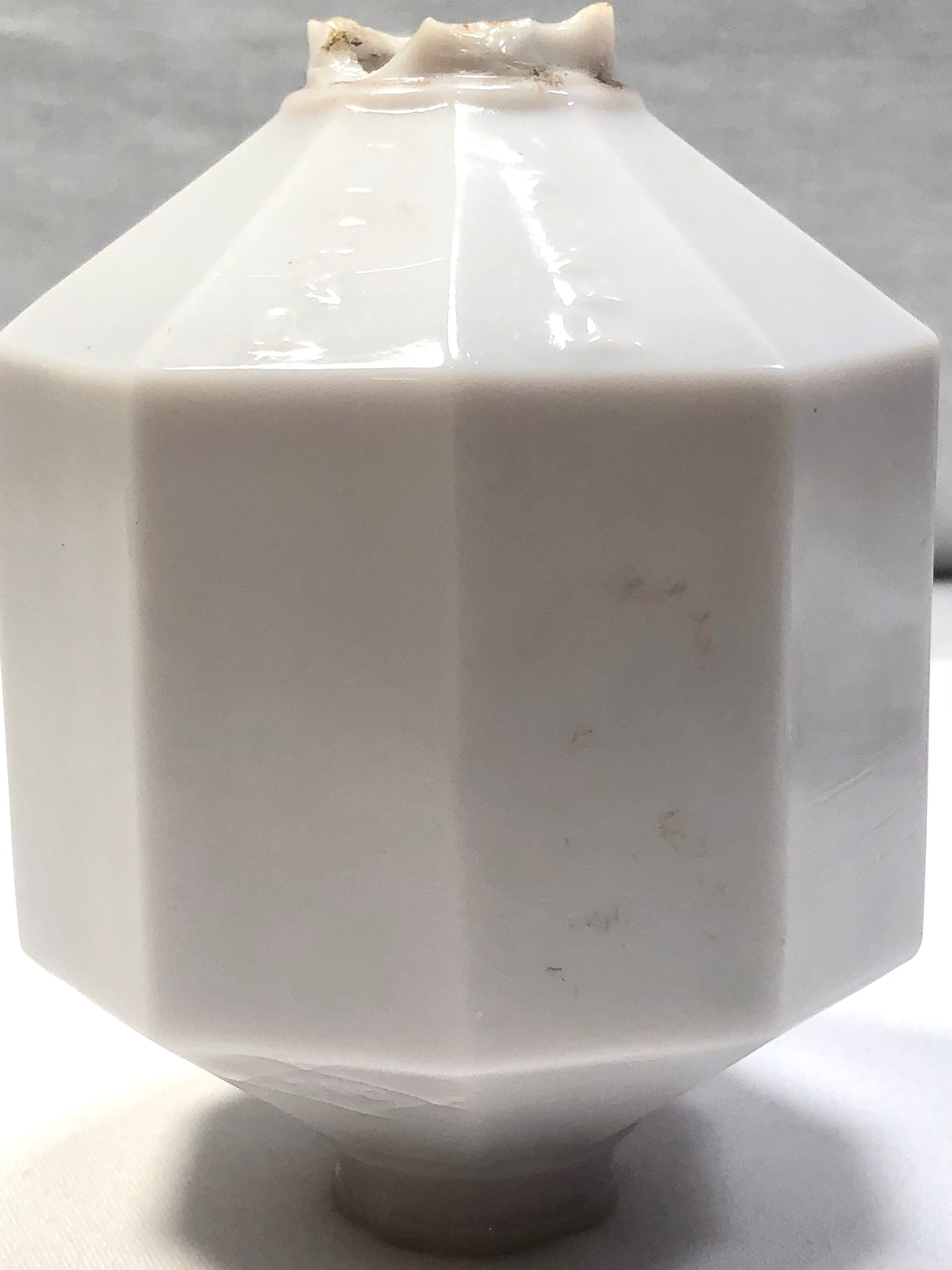 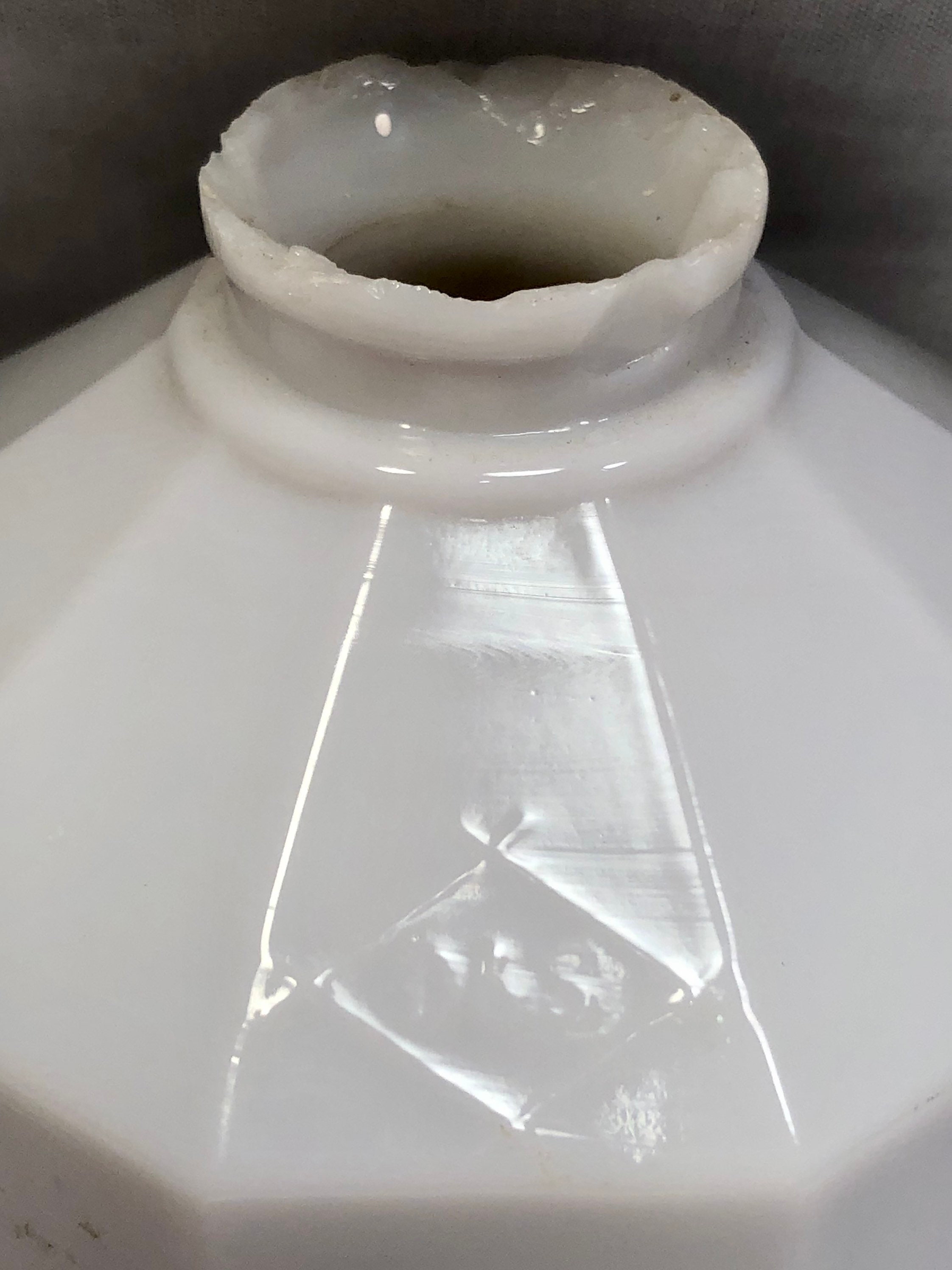 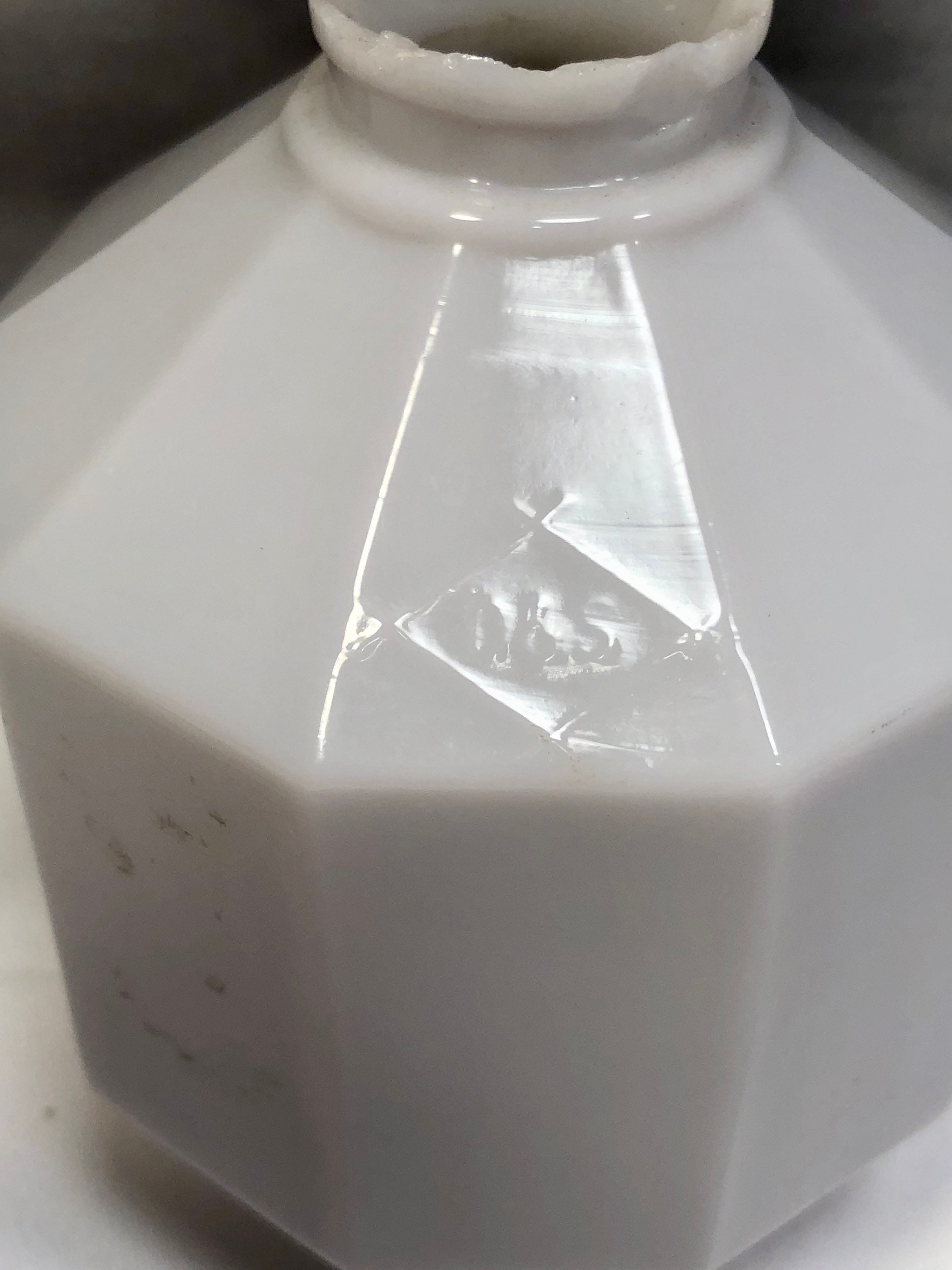 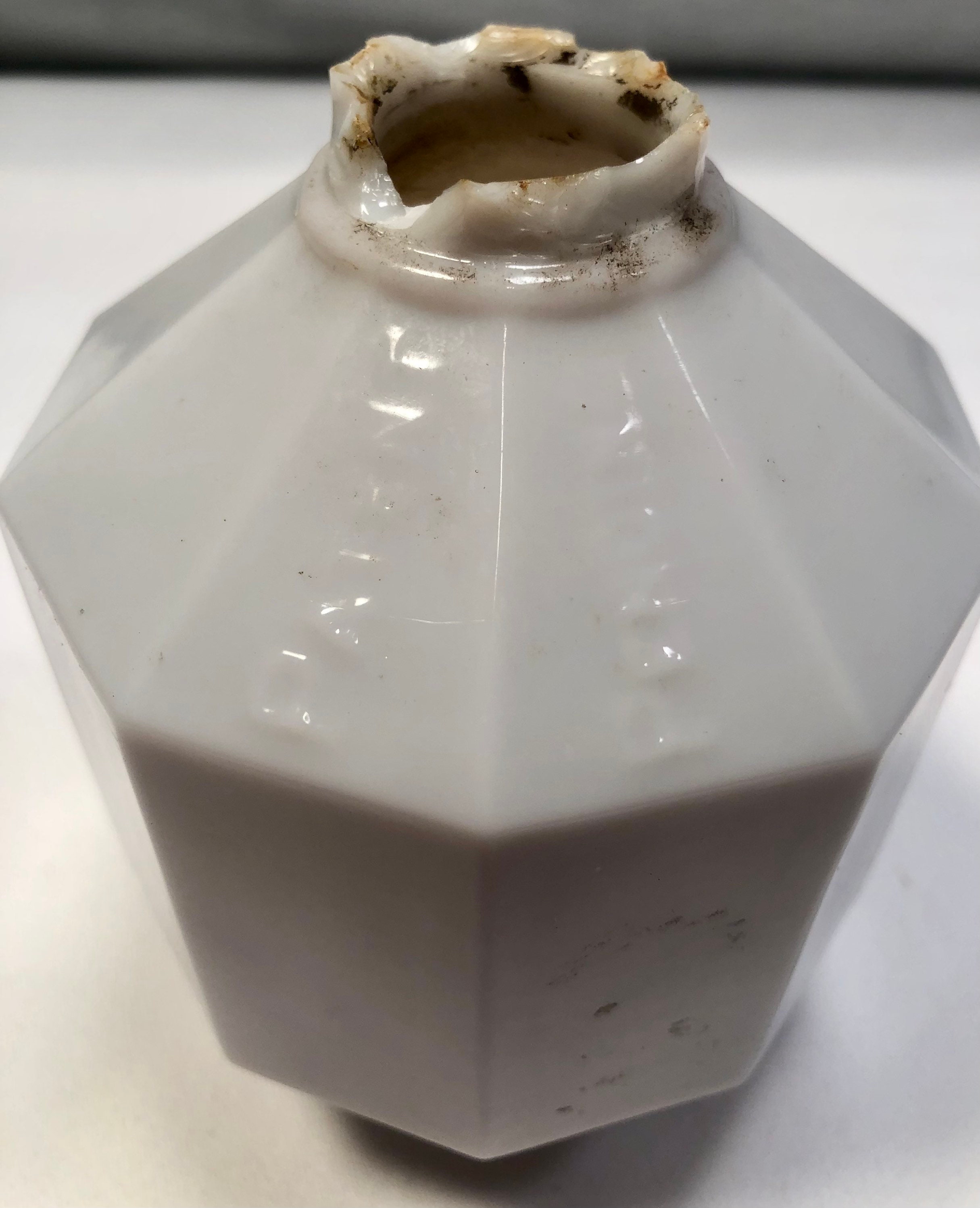 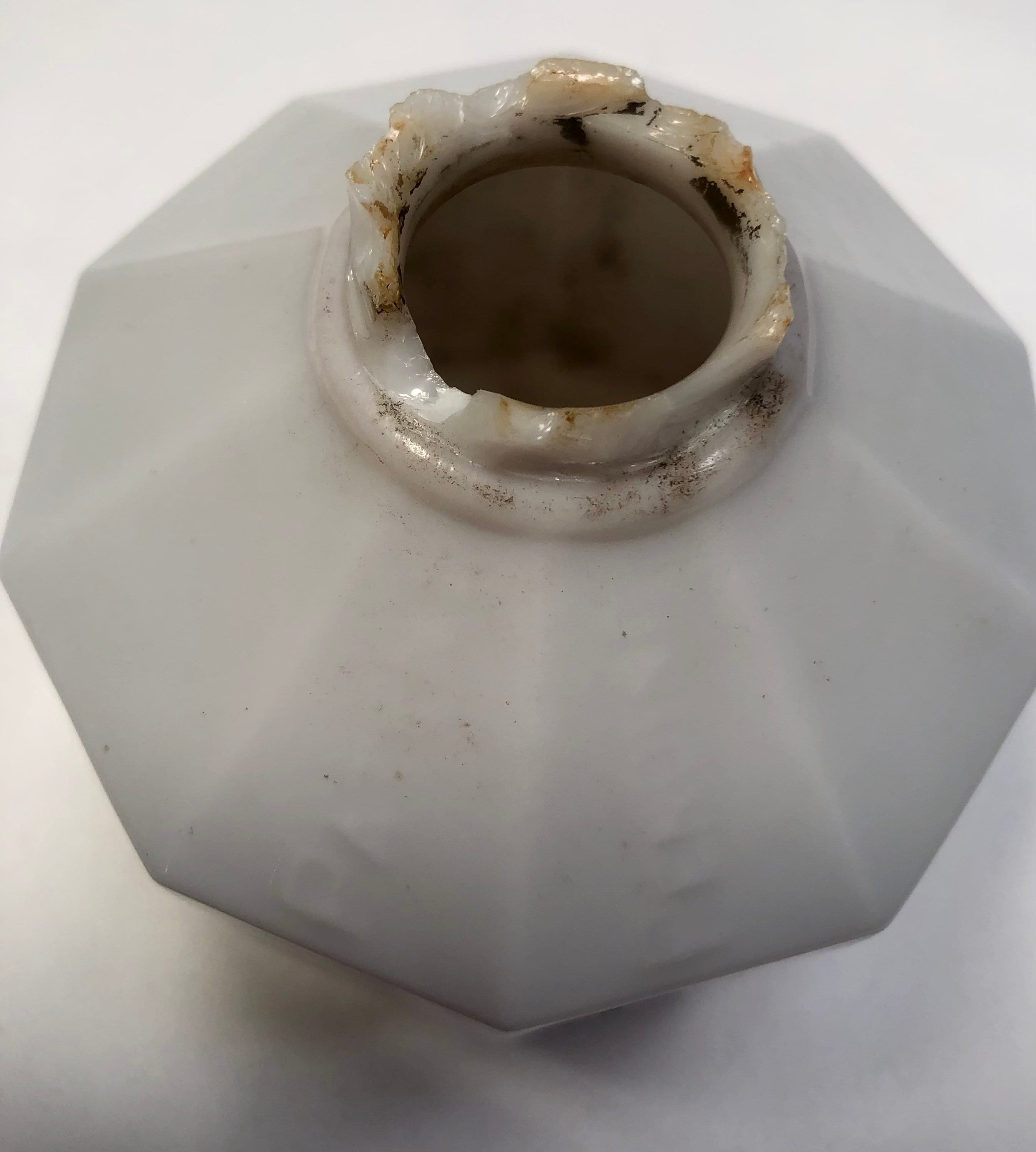 This is a beautiful smooth vintage white milk glass lightening rod/ weathervane globe circa 1930's.
It is octagonal in shape which is very cool and made by the D&S Co, marked Patent Pending.
The chipping around the collars is typical of vintage glass, which wasn't ground smooth. These can be capped.
There are no chips or cracks and it measures 51/2" tall x 3 3/4" diameter
Please read below for some very interesting history about lightening rods and globes!

Benjamin Franklin was attracted to electricity. Given its similar color, crackle, and configuration, he suspected that lightning itself was electricity. Noting that a pointed metal needle could draw electricity from a charged metal sphere, Franklin became
convinced that a metal rod could coax lightning from the sky. Why? So it would strike the rod instead of buildings or passersby. As legend has it, Franklin hopped on a horse in 1752 with key-adorned kite in hand, determined to prove his conviction.
The two pranced about under stormy skies until the charged-filled atmosphere energized the key and confirmed his suspicions. More than two-and-a-half centuries later, lighting rods persist—as decorative architectural pieces, as vestiges of the past, and as mitigators of lightning’s power.  L
ightning rods were originally developed by Benjamin Franklin. A lightning rod is very simple -- it's a pointed metal rod attached to the roof of a building.
The rod might be an inch (2 cm) in diameter. It connects to a huge piece of copper or aluminum wire that's also an inch or so in diameter. The wire is connected to a conductive grid buried in the ground nearby.
The purpose of lightning rods is often misunderstood. Many people believe that lightning rods "attract" lightning. It is better stated to say that lightning rods provide a low-resistance path to ground that can be used to conduct the enormous electrical currents when lightning strikes occur.
If lightning strikes, the system attempts to carry the harmful electrical current away from the structure and safely to ground.  In the 19th century, the lightning rod became a decorative motif. Lightning rods were embellished with ornamental glass balls that are now prized by collectors.
The ornamental appeal of these glass balls has been used in weather vanes. The main purpose of these balls, however, is to provide evidence of a lightning strike by shattering or falling off. If after a storm, a ball is discovered missing or broken, the property owner should then check the building, rod, and grounding wire for damage.
According to the Iowa Barn Association, lightning rod balls have long been part of the American rural landscape. Some were made as early as 1840. They were originally sold as ornaments for lightning rods and are found in a wide range of shapes and colors. Made of glass or ceramic, they had no practical use, but added a decorative touch to the rods. The balls were usually about four and a half inches in diameter. Glass balls were typically white and blue milk glass. Clear glass ones have often turned to amethyst from sun exposure to impurities in the glass. There are some 34 shapes or styles of lightning rod balls. The balls were sold by salesmen going from farm to farm in horse drawn wagons from 1870 until the Great Depression closed businesses.