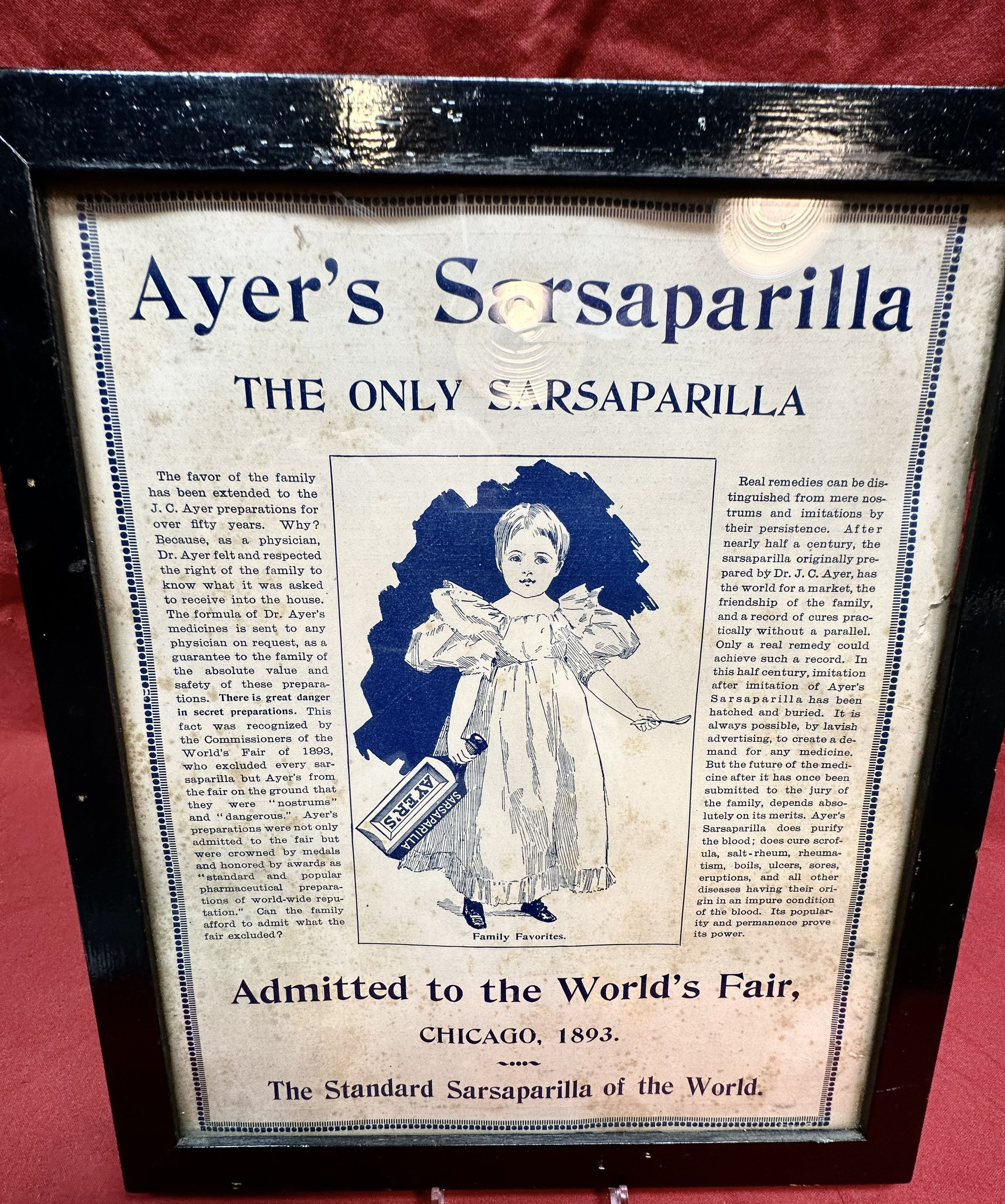 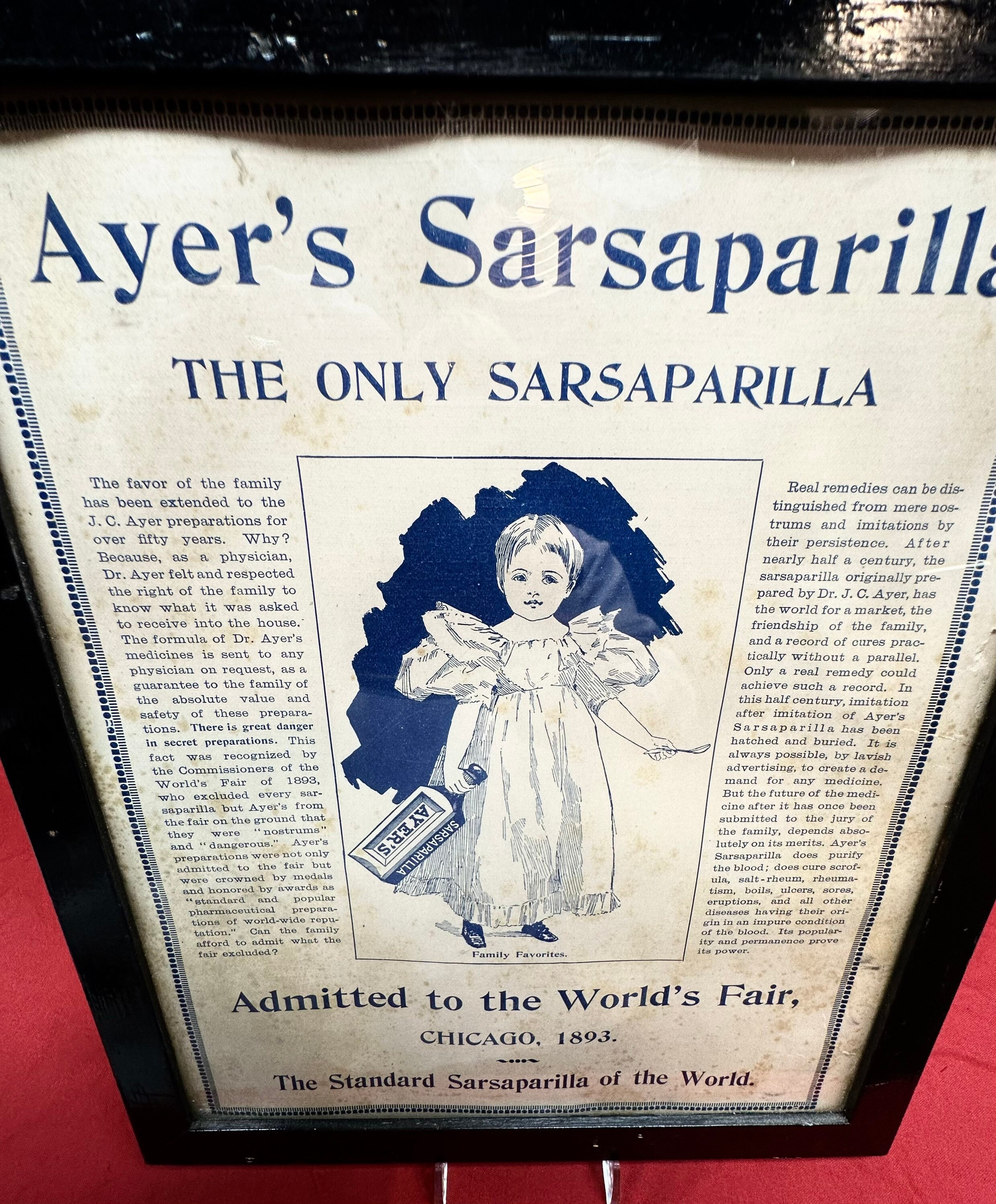 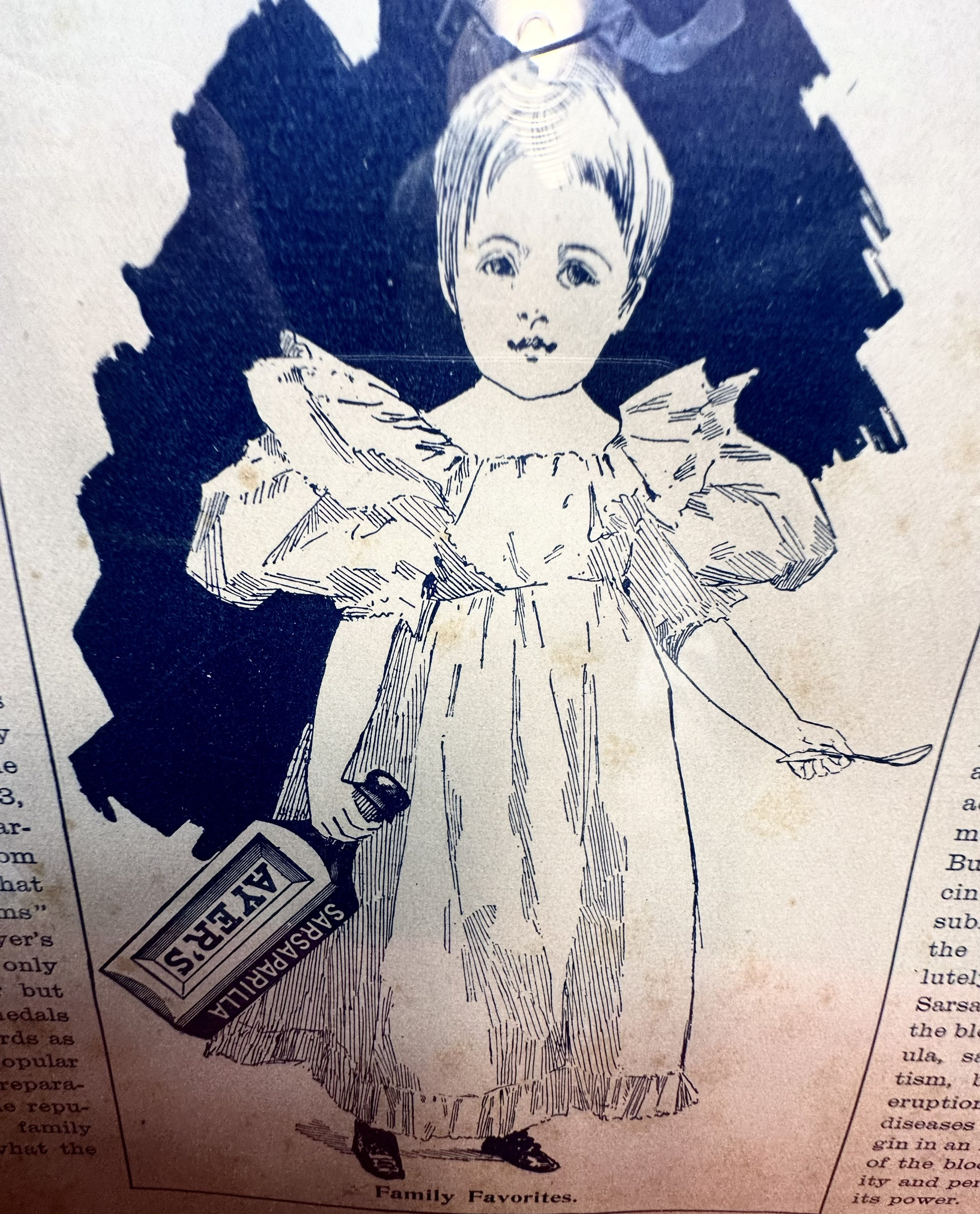 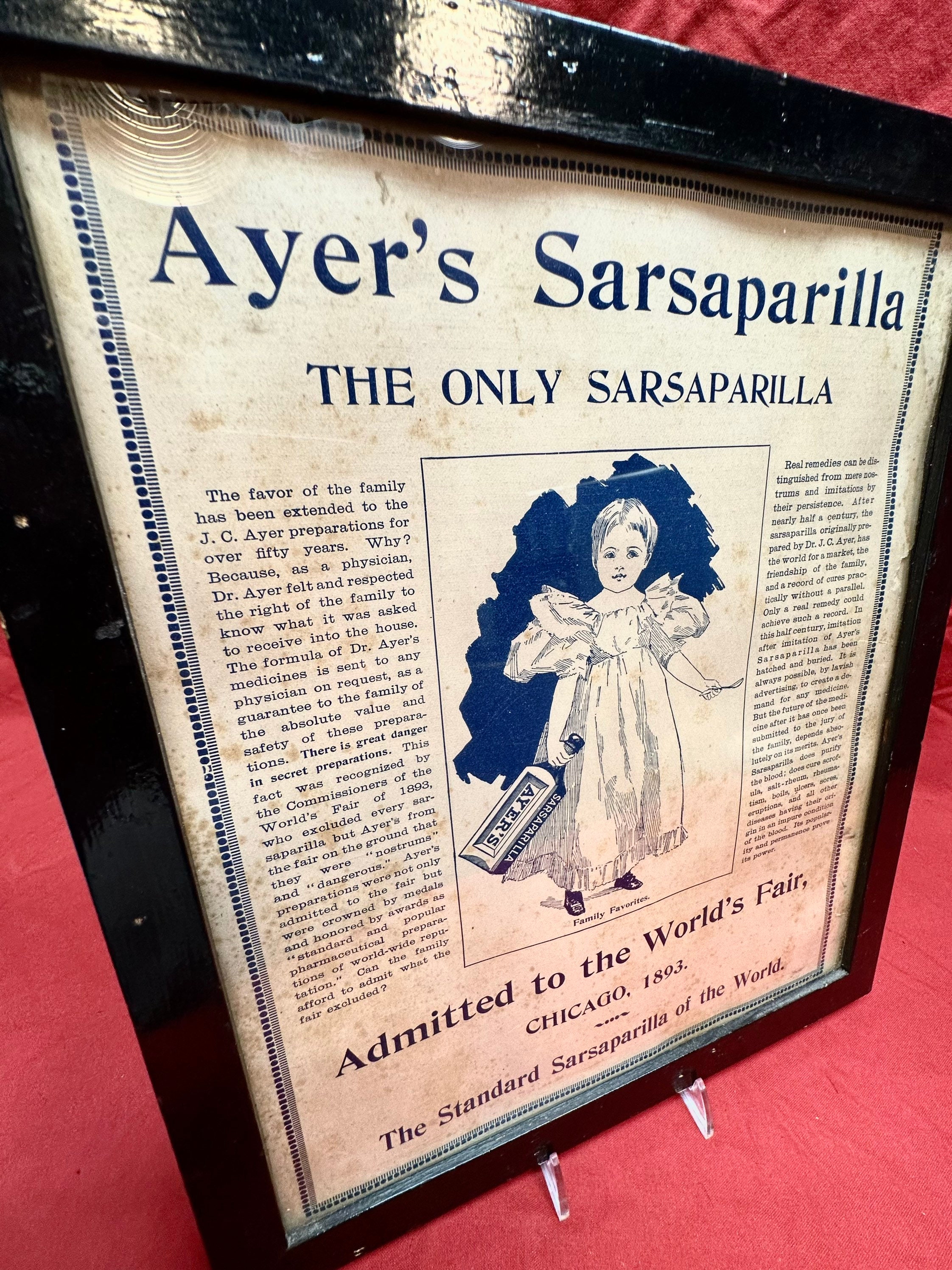 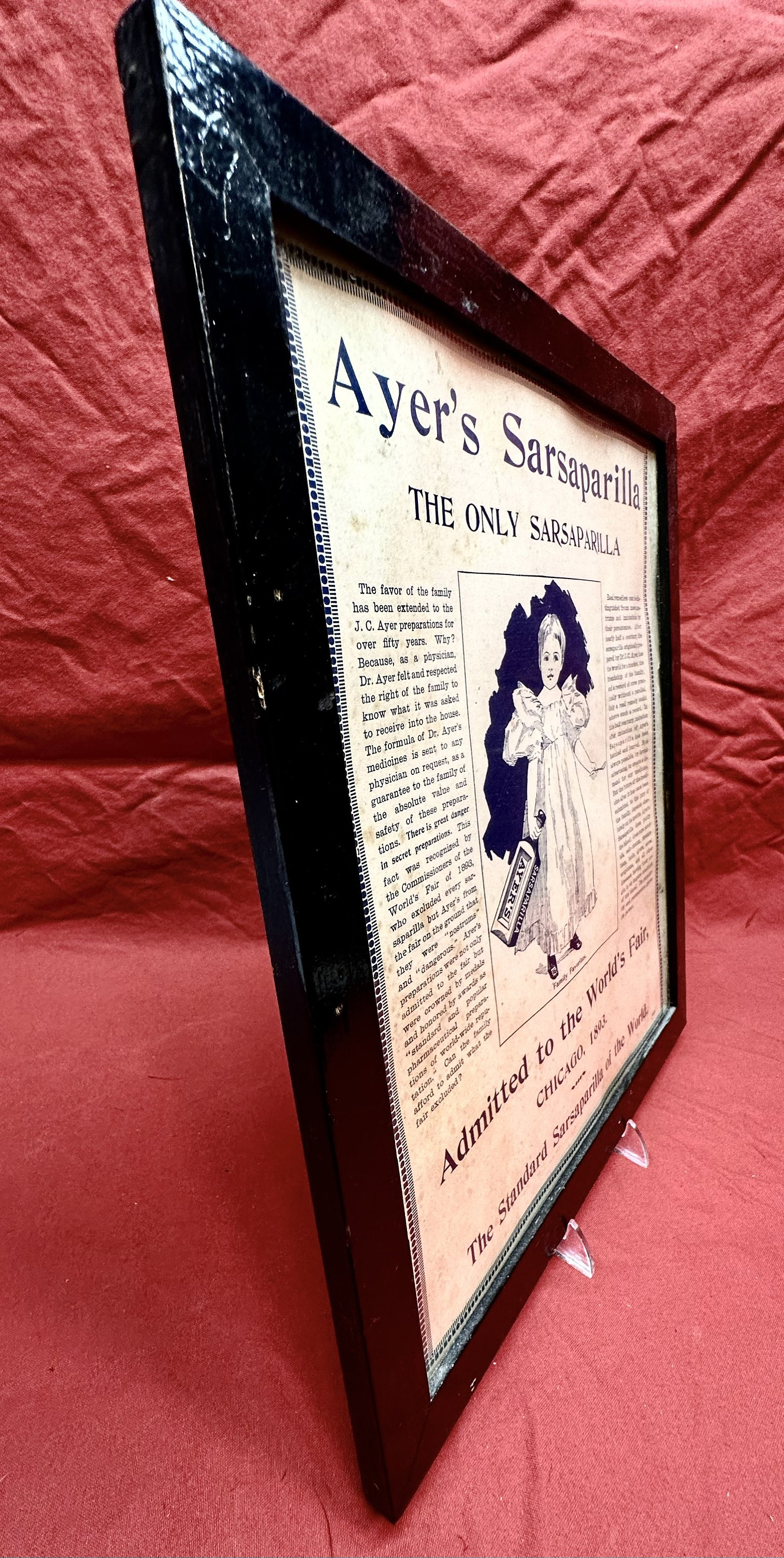 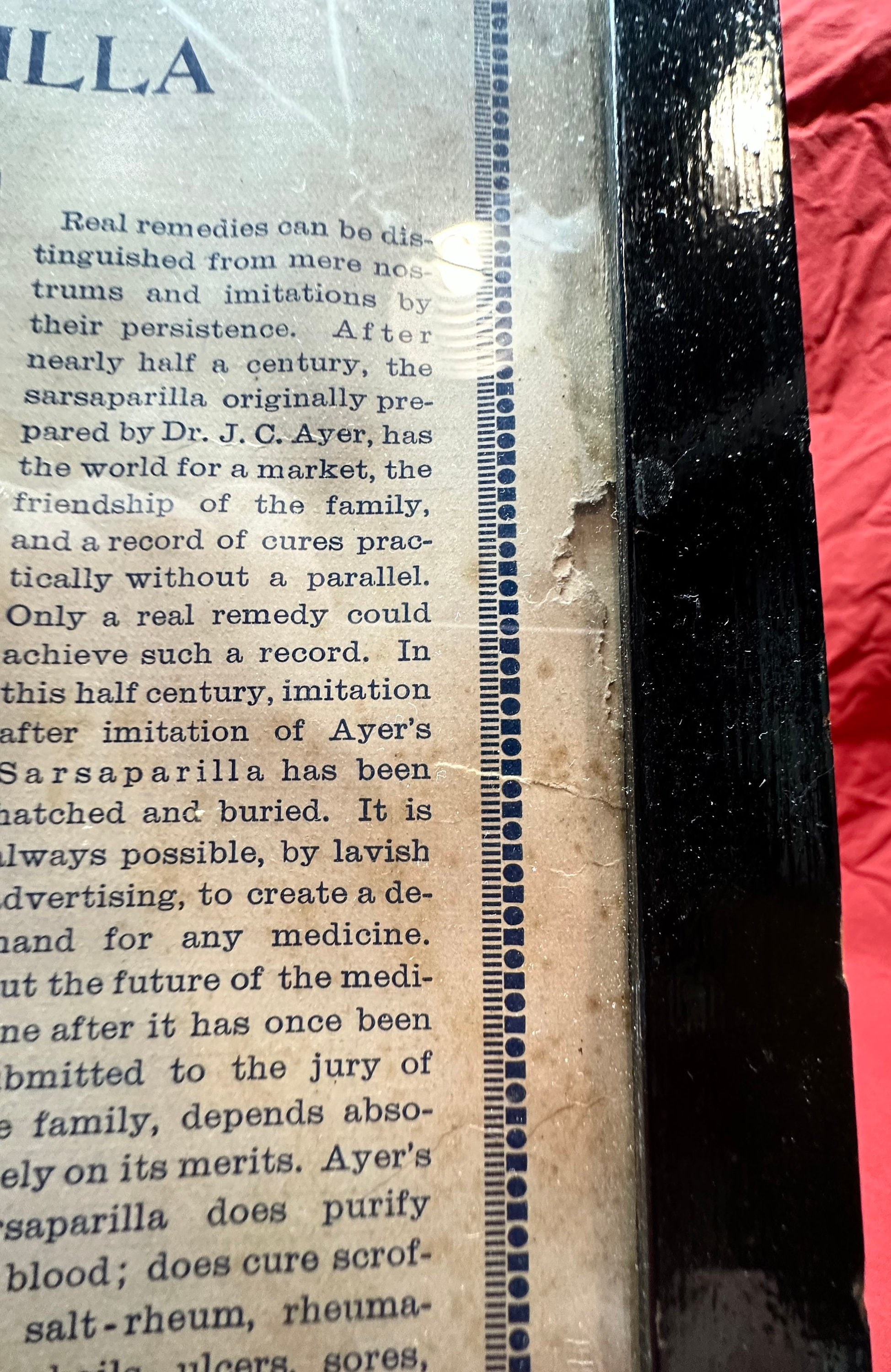 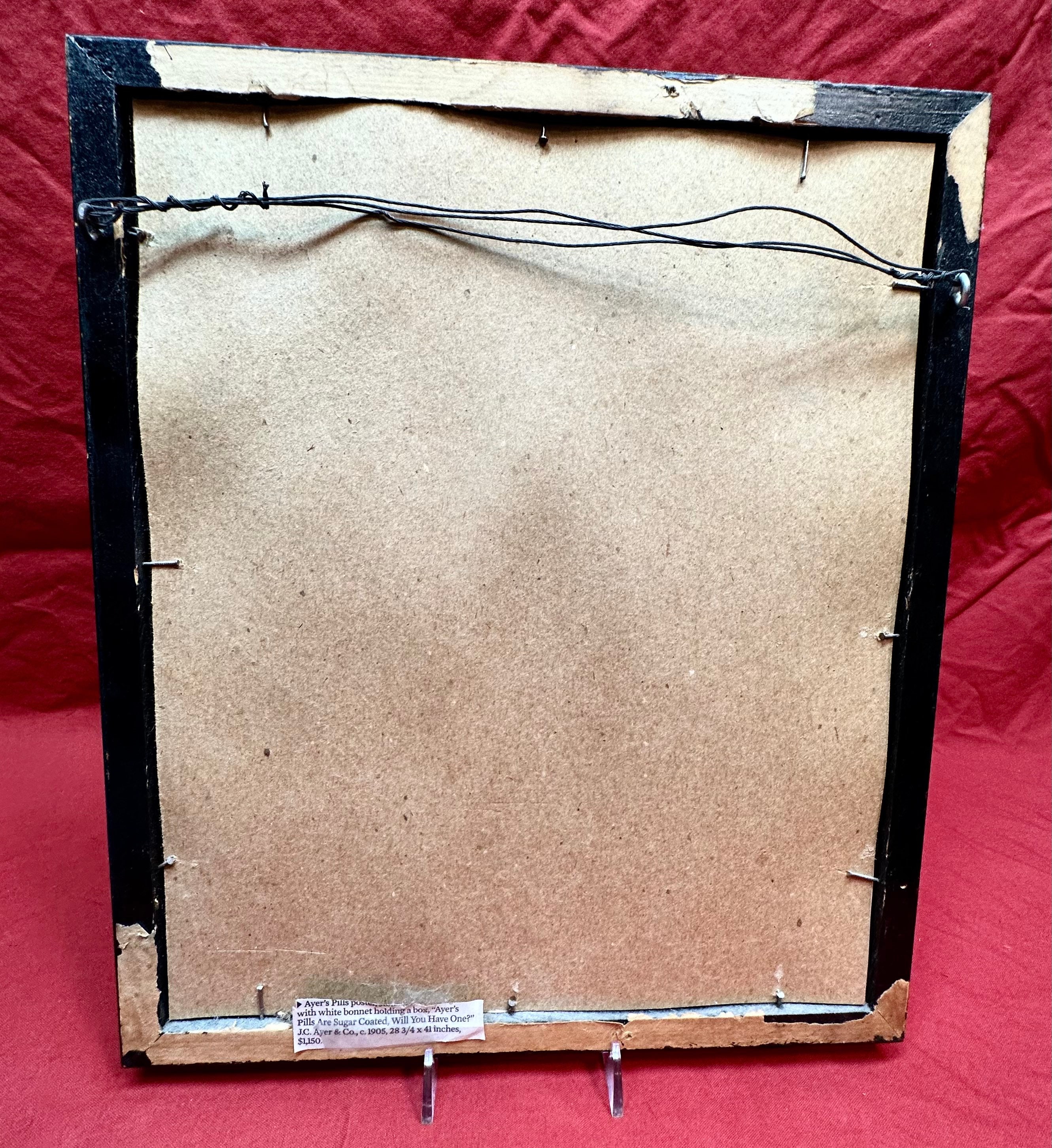 This vintage framed advertisement is for the famous Ayer's Sarsaparilla.
A sweet little girl holds a medicine bottle- since it's good for the whole family
Framed in a simple painted black wooden frame it holds an original advertisement from 1896 - one side shows where it was taken from a magazine of the time.
It touts it is the Only sarsaparilla allowed to be sold at the Worlds Fair - so therefore... it's the best.

In 1843, James Cook Ayer mixed up a cherry cough medicine in a Lowell, Mass., apothecary while his boss was on vacation in Europe.
The cough medicine, known as ‘Cherry pectoral,’ marked Ayer’s first step on the road to a fortune. It was followed by a strong laxative called Cathartic Pills, a blood medicine called Sarsaparilla that was supposed to cure syphilis, a cure for malaria called Ague Cure, and a hair restorer called Hair Vigor.
James Cook Ayer would become the most successful patent medicine manufacturer of his age. He accumulated one of the great fortunes of the era, an estimated $20 million.

He was born May 5, 1818 in Groton, Conn. His father died when he was seven, and at 13 he was sent to live with his uncle, a manufacturer who later became a mayor of the new city of Lowell, Mass. He attended public schools in Lowell
At 19 he became an apprentice to an apothecary, Jacob Robbins. He also studied medicine with a local doctor, Samuel Dana, eventually graduating from the University of Pennsylvania with a medical degree in 1860.
When he was 22, he bought the apothecary shop for $2,486.61 with money borrowed from his uncle. He paid him back in three years.

Physicians happily prescribed Ayer’s medicines, but the real secret to his success was advertising. He spent $140,000 a year on advertisements that promoted the benefits of his medicines with charming, whimsical illustrations. He distributed millions of free copies of an almanac that hawked his cures.

Ayer advertised cherry pectoral as a cure for ‘coughs, colds, asthma, croup, laryngitis, bronchitis, whooping cough and consumption.’ His most popular product, sarsaparilla, was ‘a real blessing that purifies the blood, stimulates the vital functions, restores and preserves health, and infuses new life and vigor throughout the whole system. He recommended it for jaundice, dyspepsia, pimples, boils, ringworm, female weaknesses and ‘lassitude and debility peculiar to the Spring.’

He was accused of using misleading advertising to sell quack medicines and miracle cures.
His defenders say Ayer’s claims were well within the bounds of medical knowledge in the 19th century.

Cherry pectoral contained three grams of morphine – but that was a lot less than doctors were prescribing at the time.
Cherry pectoral did not cure lung ailments, as advertised, but it did treat the symptoms of a cold, which helps patients improve.
Some of Ayer’s products contained small amounts of alcohol to preserve the plant material that comprised his medicines.
But certainly some of his products did not live up to their billing.
Sarsaparilla didn’t work. Hair Vigor didn’t work. But Ague Cure contained bark from the cinchona tree – which later became known as quinine and was very effective in fighting malaria.

The town of Ayer, Mass., was named after him.