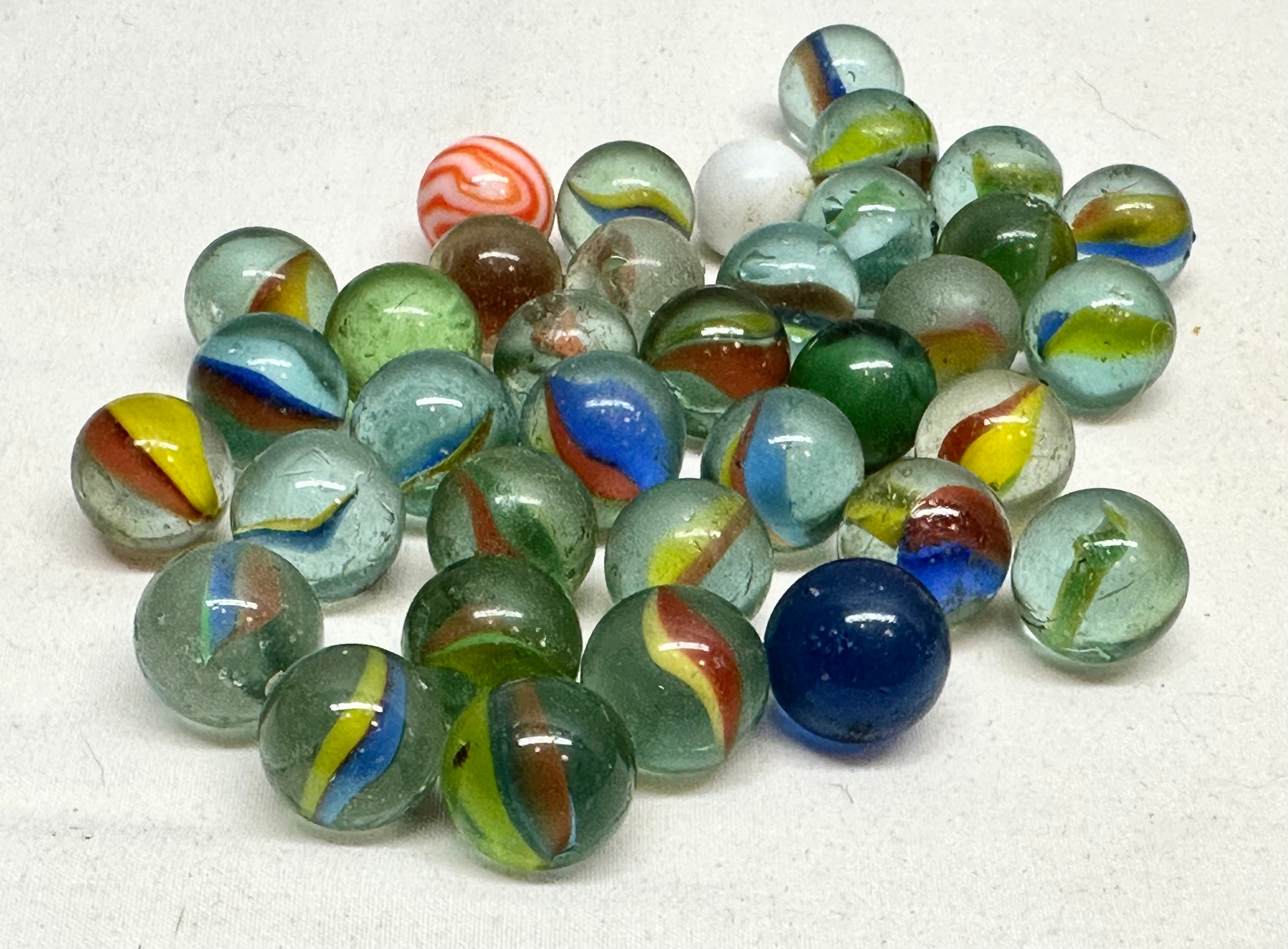 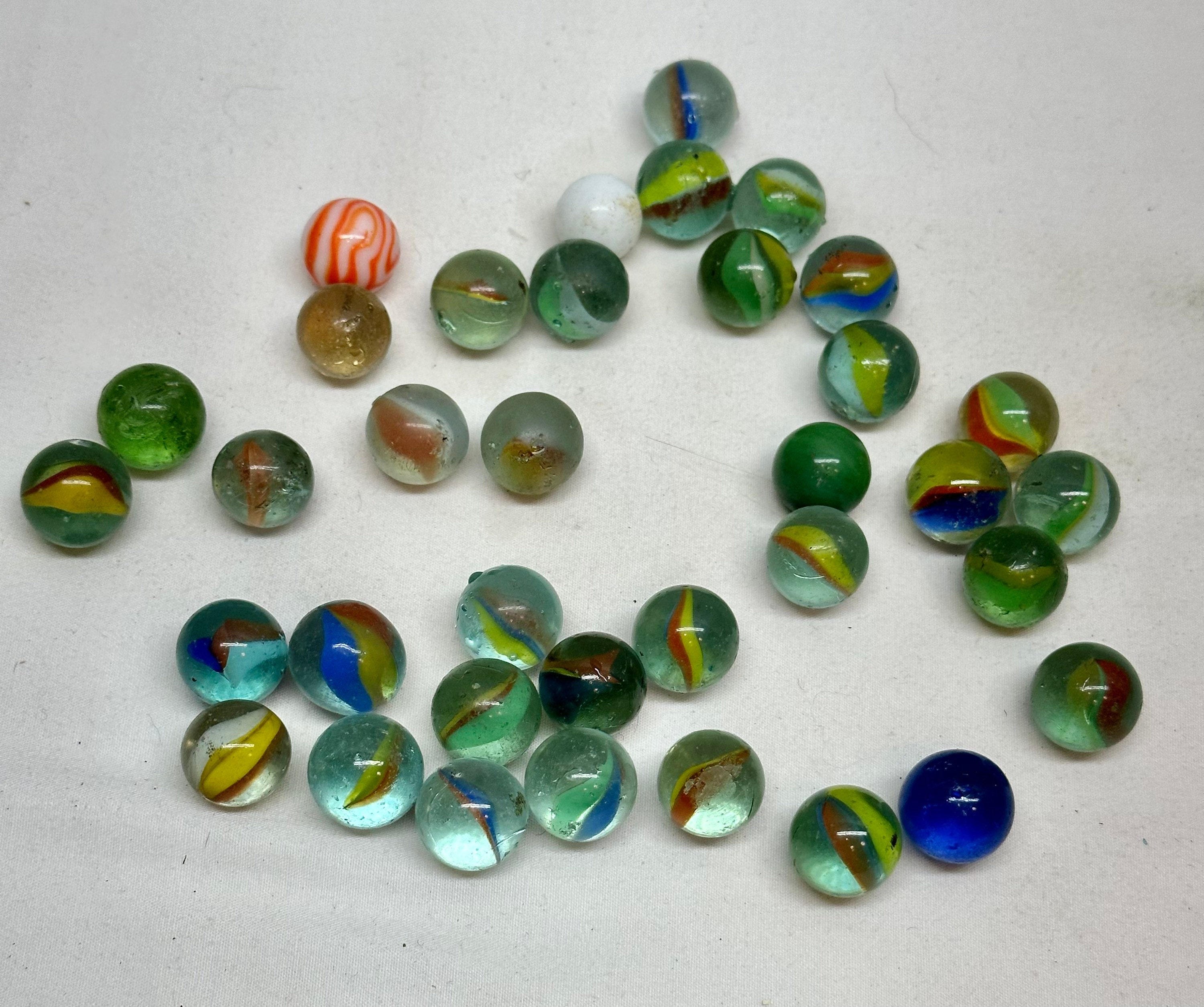 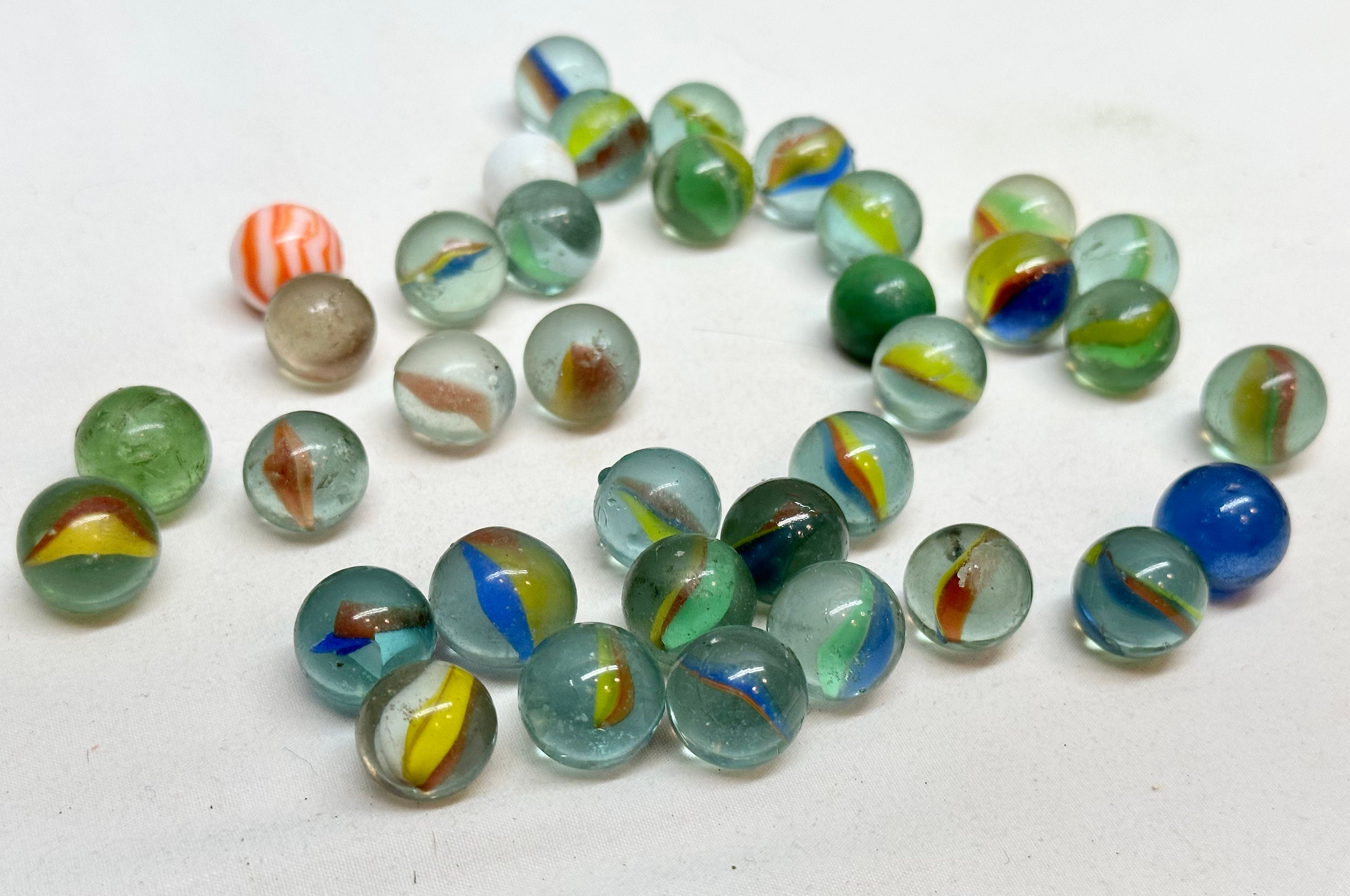 These vintage marbles are a classic.
Made of glass they are clear with a swirl of color in the glass which makes them look like 'cat eyes'
They have been used and played with and therefore may have nicks and rubbing.
Five marbles are solid but clear, the rest are the 'cat eye' style.
There are a total of 36 and are great for a starter collection, game room decor or vase filler

Believe it or not, but no one really knows where marbles originated. They've been found in the ashes of Pompeii and in the tombs of ancient Egyptians, and they were played with by Native American tribes, so it's impossible to pin down a precise country of origin. The earliest examples were simply stones that had been polished smooth by a running river, but for centuries artisans made them by hand from clay, stone, or glass. Mass production became possible in 1884, when Sam Dyke of Akron, Ohio, created a wooden block with six grooves, each of which held a lump of clay. An operator would roll a wooden paddle over all the clay balls at once, with a back-and-forth and slightly lateral motion, creating six marbles. With around 350 employees, Dyke's factory was cranking out five train carloads, or about one million marbles, every day. Mass production made marbles much cheaper to make, allowing the price to drop from about one penny each to a bag of 30 marbles for the same price. Other businessmen jumped on the bandwagon and Akron soon became the marble capital of late-19th century America. In 1915, mass production of glass marbles began, thanks to a machine invented by Akron's M.F. Christensen. His machine consisted of a screw conveyor made up of two grooved cylinders spun next to each other. A "slug" of molten glass was placed between the cylinders on one end and it was gradually carried down to the opposite side, simultaneously cooled and shaped into a sphere by the rolling grooves. The design worked so well, it has remained essentially unchanged and is still the most common way to make marbles today. Marbles were really popular throughout the early part of the 20th century, but World War II rationing, plus the utter chaos of the European Theatre, put a damper on the sport. It enjoyed a brief resurgence in the 1970s, and continues to be played today, but it has never been able to reclaim its title as a childhood institution. To the layman, a marble is just a marble. But if you're an experienced player, you probably have a half-dozen slang terms to describe the sphere in front of you.  Marbles usually earn their nickname based upon what they look like, what they're used for, or the material used to make them. For example, "aggies" are marbles that are made from agate, a type of stone. An "alley" can be a marble made of alabaster, but it can also be another term for a "shooter" or "taw," the large marble used to knock around the smaller ones, which are sometimes called "mibs" or "ducks." "Bumblebees" are yellow and black striped. "Jaspers" are common, blue marbles made from glazed or unglazed china. "Onionskins" are glass marbles with swirls of layered colors that extend over the length of the marble. "Sulphides" are semi-opaque glass marbles that usually contain a small figured in the middle. Sometimes the figurine is an animal, a character (like Santa Claus), or even a real person (like Teddy Roosevelt, at left). And if you can spot any of these marbles on sight, you're probably a "mibster," a term for someone who plays marbles. Size, manufacturer, and condition are important, but the main thing a marble collector looks for is the beauty of the design. There are, of course, many different styles that are popular with collectors, with about a dozen different terms used to describe them. Some of the more popular styles are onionskins, corkscrews, lutz, micas, clearies, Indians, Joseph's Coat, oxbloods, and sulphides