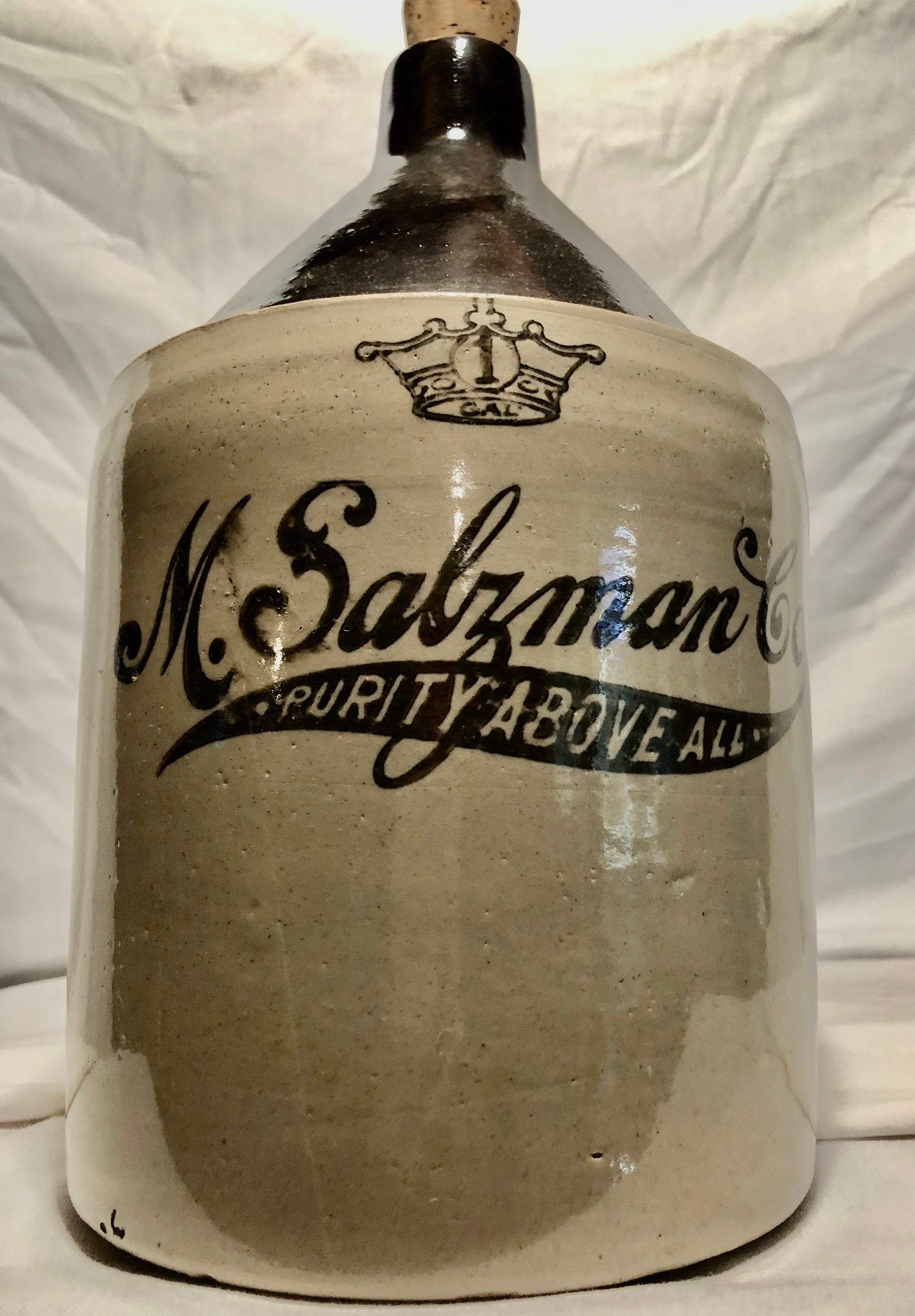 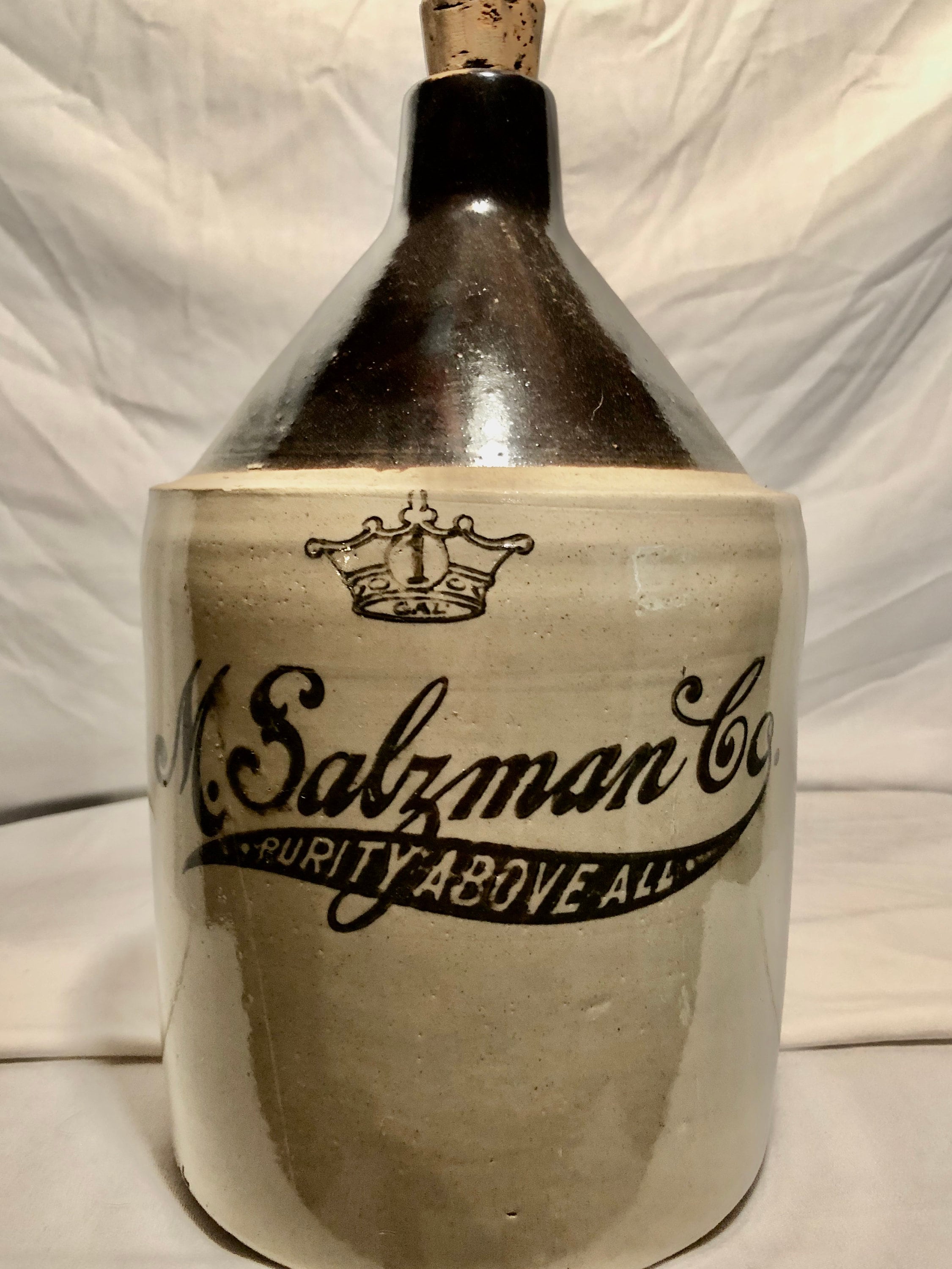 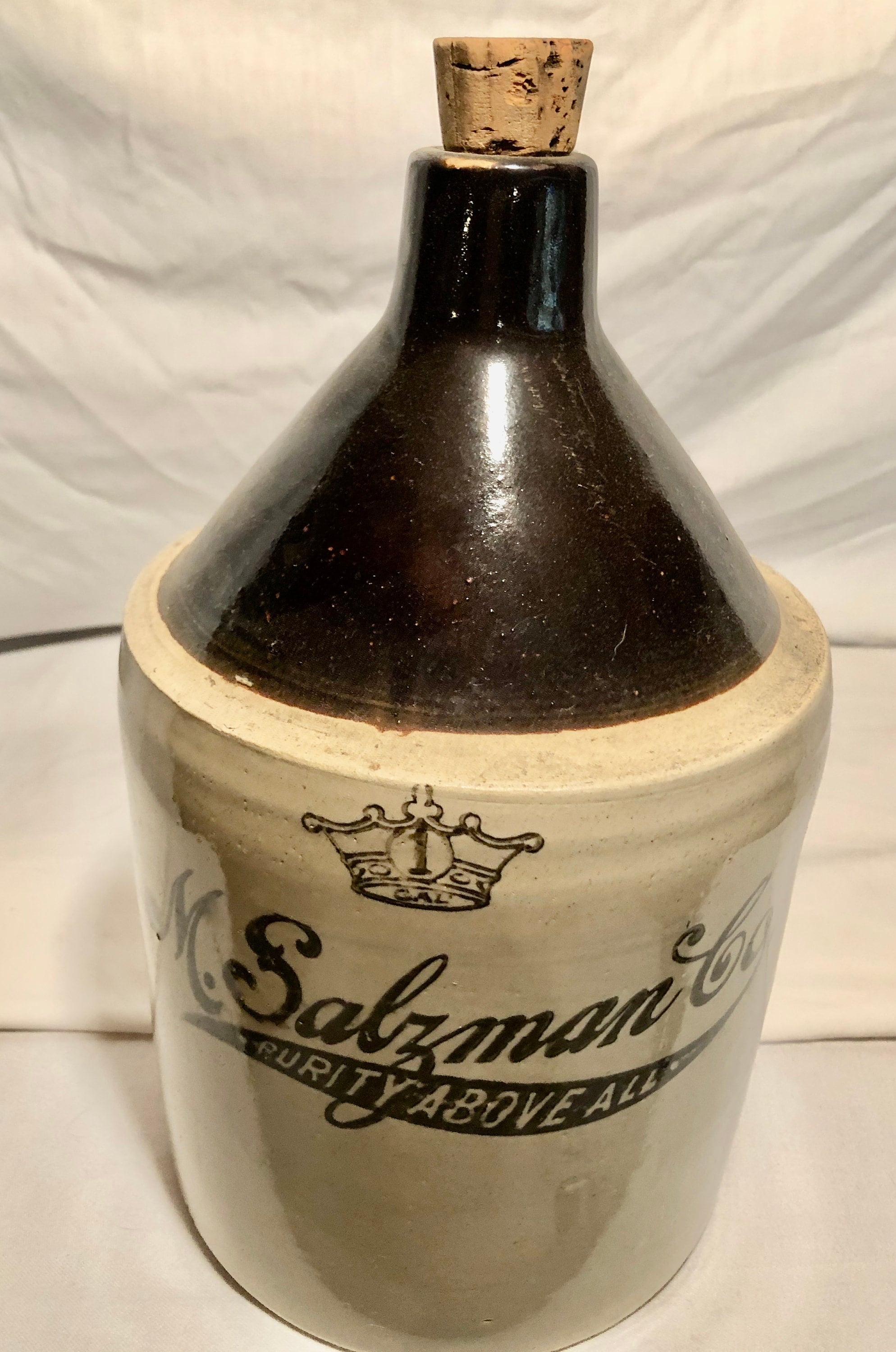 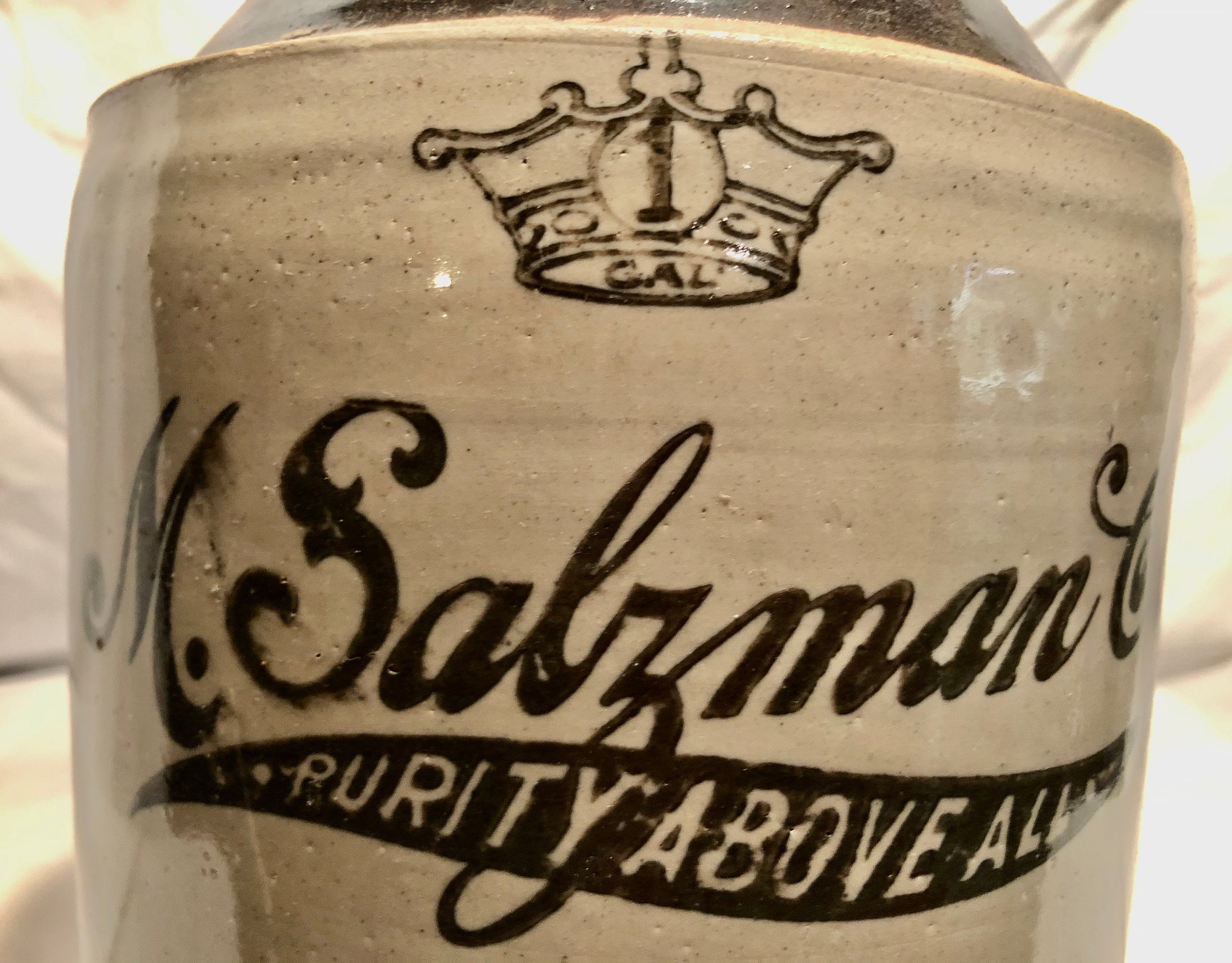 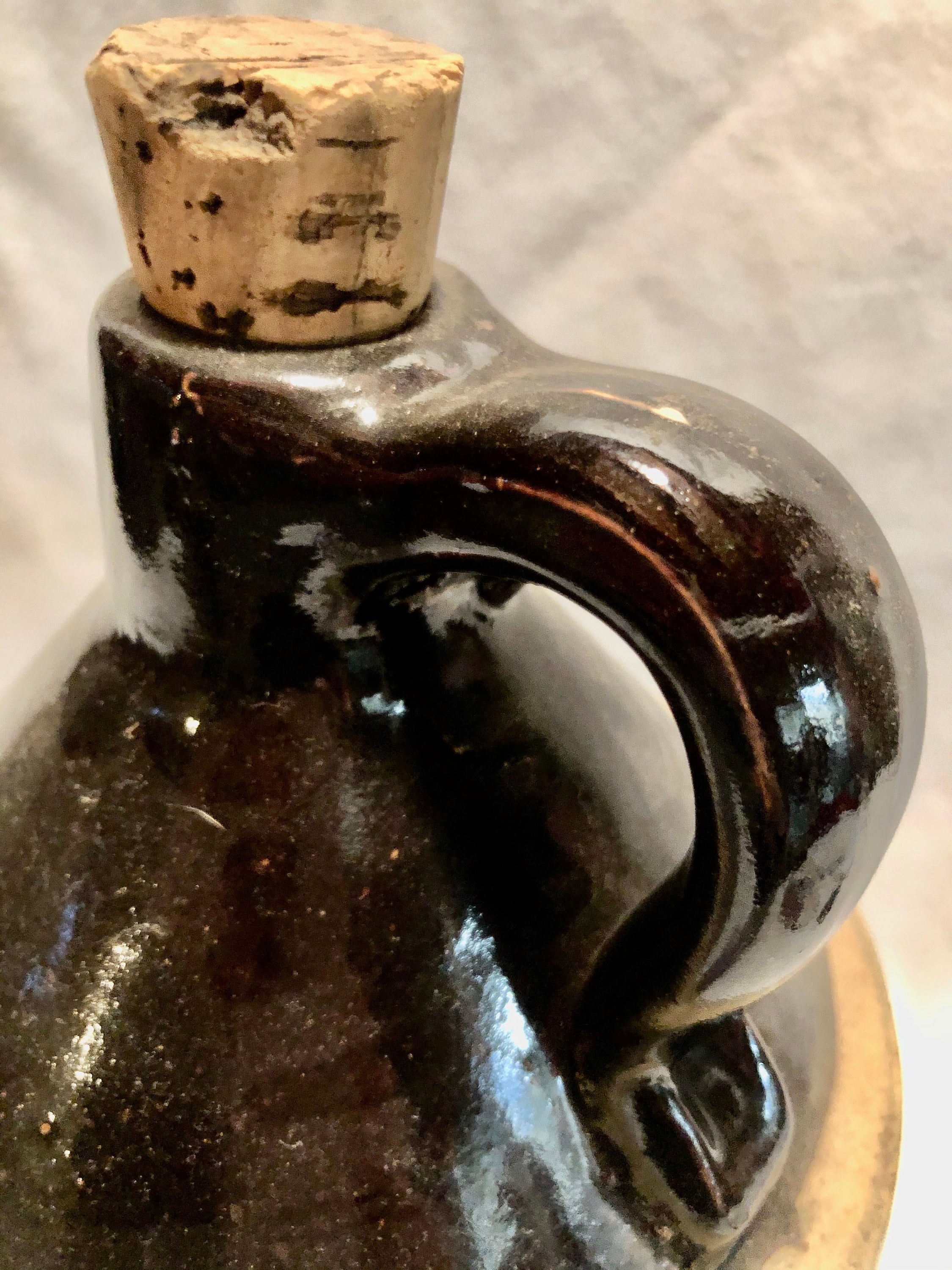 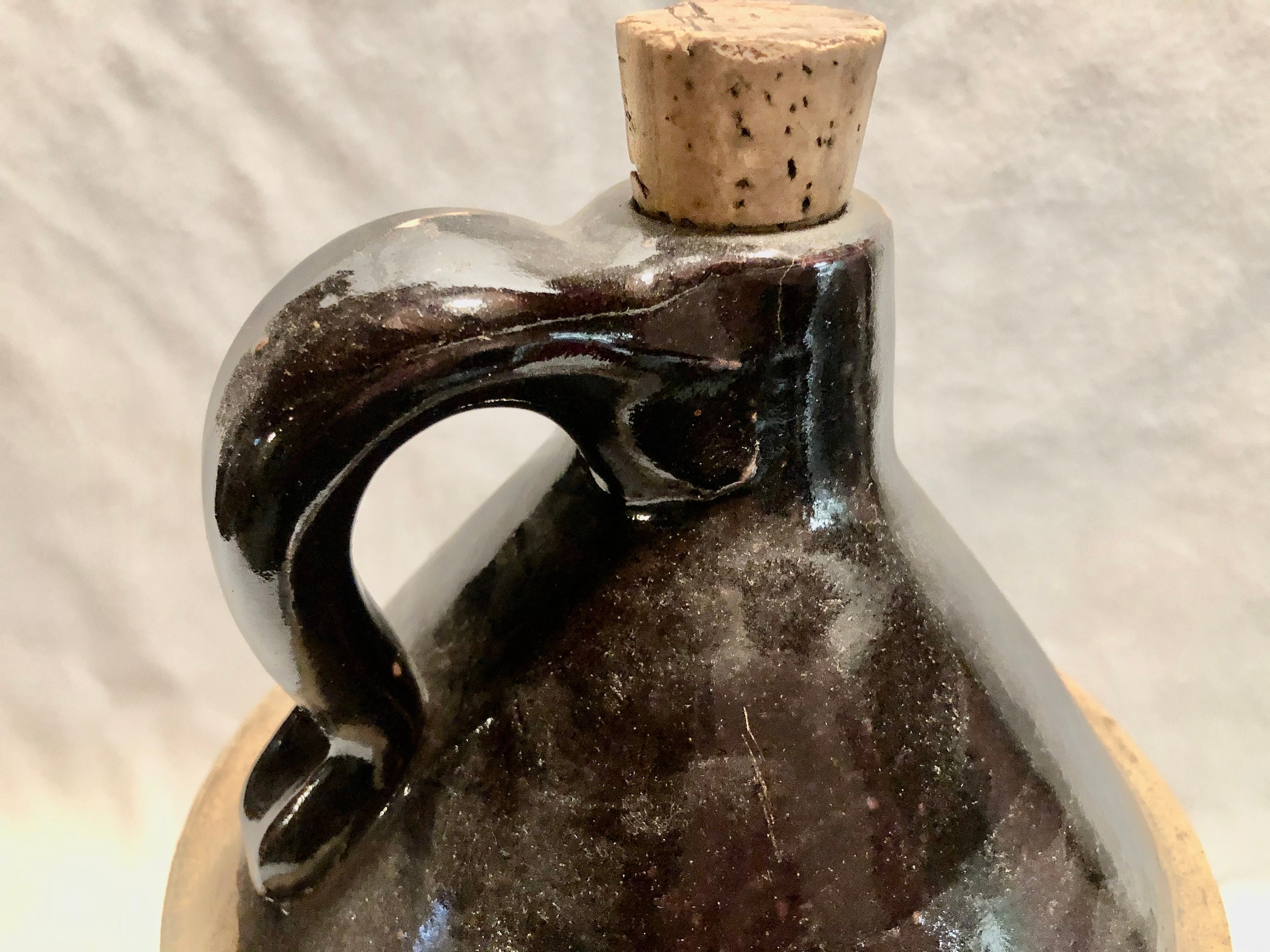 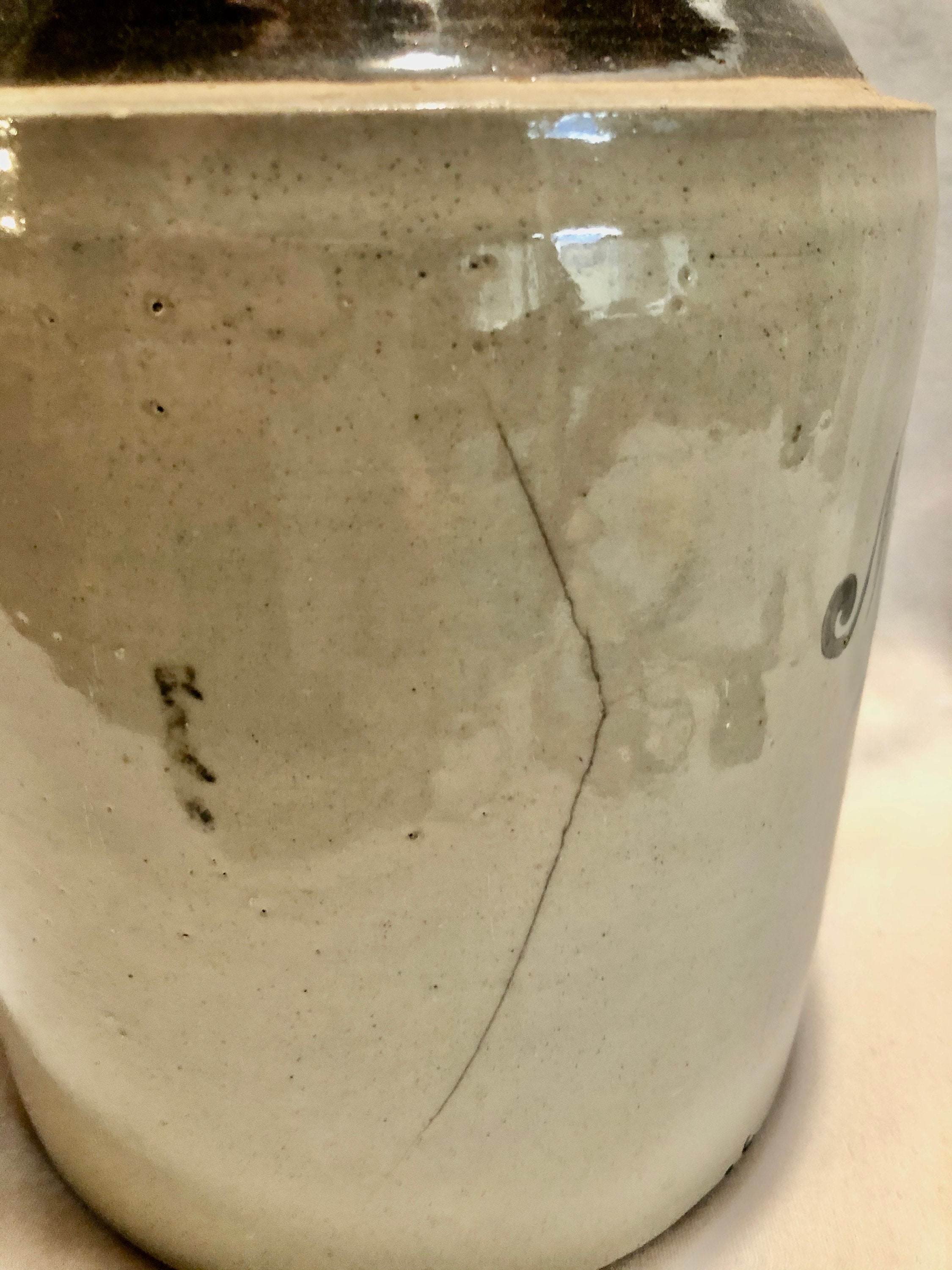 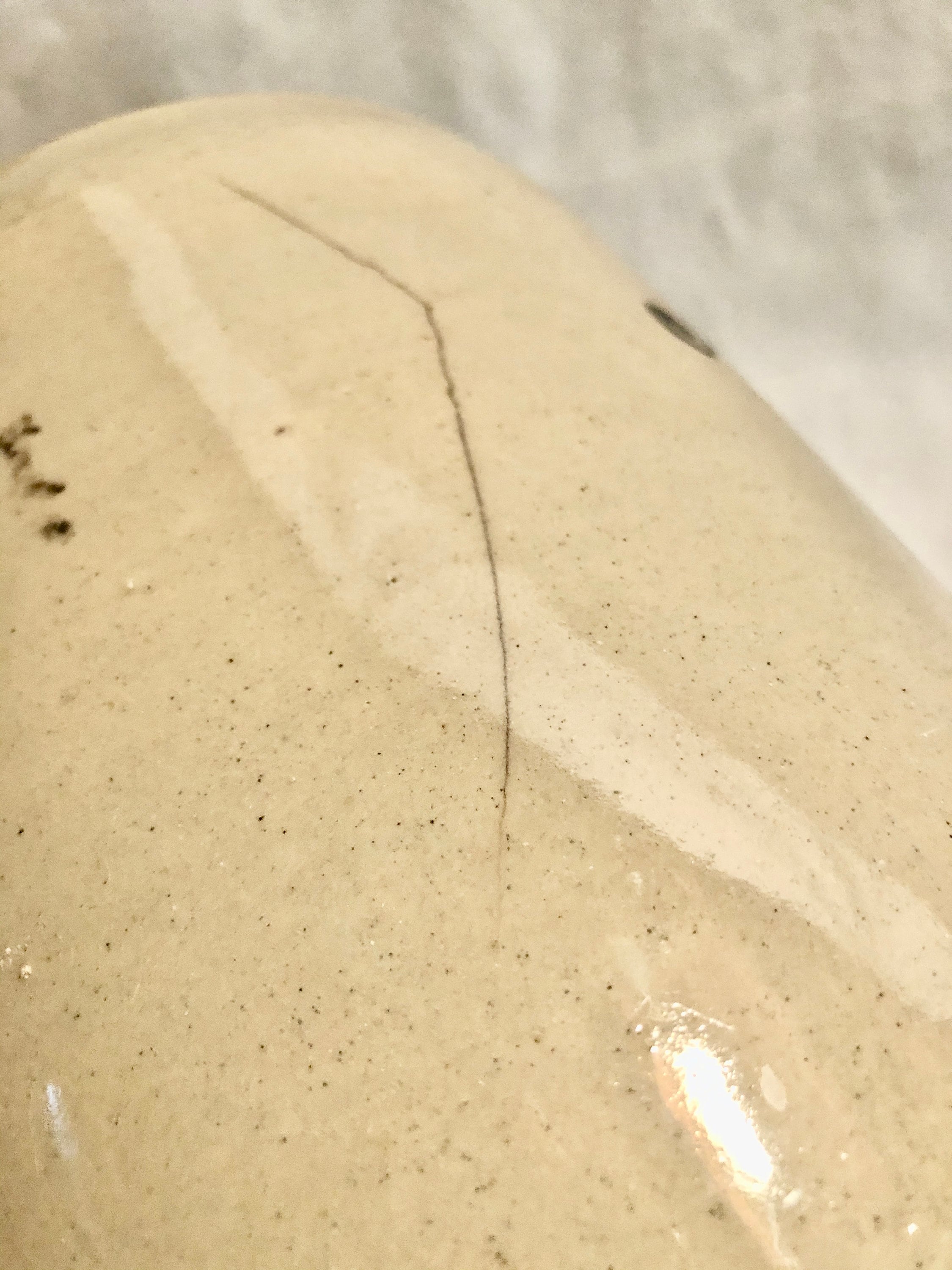 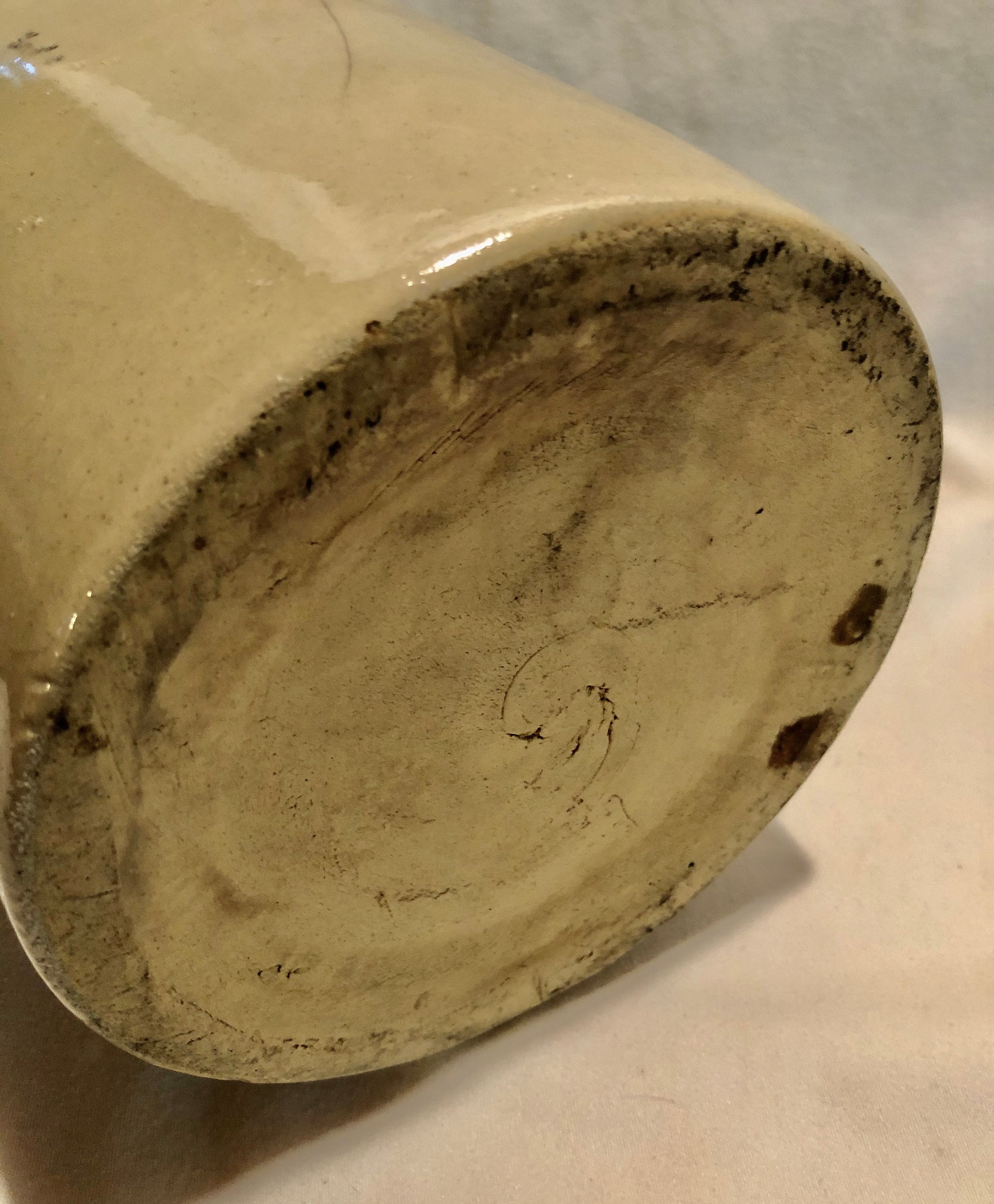 This is a vintage 1 gallon stoneware advertising whiskey jug -M. Salzman Co with 'Purity Above All' Banner.
Bristol glaze finish.
It stands 11 1/4" x 7" diameter.
The handle is sturdy and has its cork.
There is an old hairline crack along one side which can be seen in pictures.
This is an antique item with signs of use and age- please contact me with any questions or for further information or pictures.

Salzman did not begin life rich.  Born in Austria in 1870,  he emigrated to the United States about 1886 at the age of 16.  He came alone with little money and no ability to speak English,  settling into the Jewish section of New York’s Lower East Side.   He proved to be a quick learner and early on, we can presume, worked in the city’s liquor trade.
At the turn of the 20th Century,  Salzman teamed with another New Yorker to form their own wholesale and retail liquor operation in Brooklyn, located at 417 6th Avenue. Salzman & Siegelman became known for issuing their whiskey and wines in ceramic jugs.  After several years in business,  for reasons unknown,  Siegelman left the partnership and set up his own business.  Shortly thereafter Salzman himself created a new enterprise called M. Salzman & Co.  It was located in Brooklyn at 248 Third Avenue until Prohibition. The interior is shown here
What became known as the “Pure Food and Drug Act” was passed in 1906 after much discussion and publicity.  Some whiskey men were quick to seize on the purity angle in their merchandising,  but none with more emphasis and tenacity than Morris Salzman.
“PURITY ABOVE ALL”  was a slogan to be found on everything that flowed from the Salzman establishment.   He frequently packaged his whiskey in ceramic jugs, ranging in size from quarts to five gallons.  On each one was his name and a banner proclaiming his motto.   On his quart and smaller  glass whiskeys,  the mantra was inscribed in the embossing.   It appeared on his labeled whiskeys, giveaway items and in every advertisement.  If you saw the name Salzman you also saw “PURITY ABOVE ALL.
Salzman featured a number of brands without signaling a flagship.  They included: "Old Webster Pure Rye,”  "Sycamore Pure Rye," "Adirondack Pure Rye,” "Bellwood Bourbon," "Empire Pure Rye," "Old Doctrine Club,"  "Pure Old Rye,”  and always "Purity Above All." Clearly in competition with dozens of myriad New York whiskey merchants, including his former partner, Morris issued several giveaway shot glasses,  one suggesting drinking his whiskey in the morning, the other at bedtime