Some Gave All.... The Incredible Story of One Man and One Flag. In Honor of Those that fought and died for Our Freedom.. 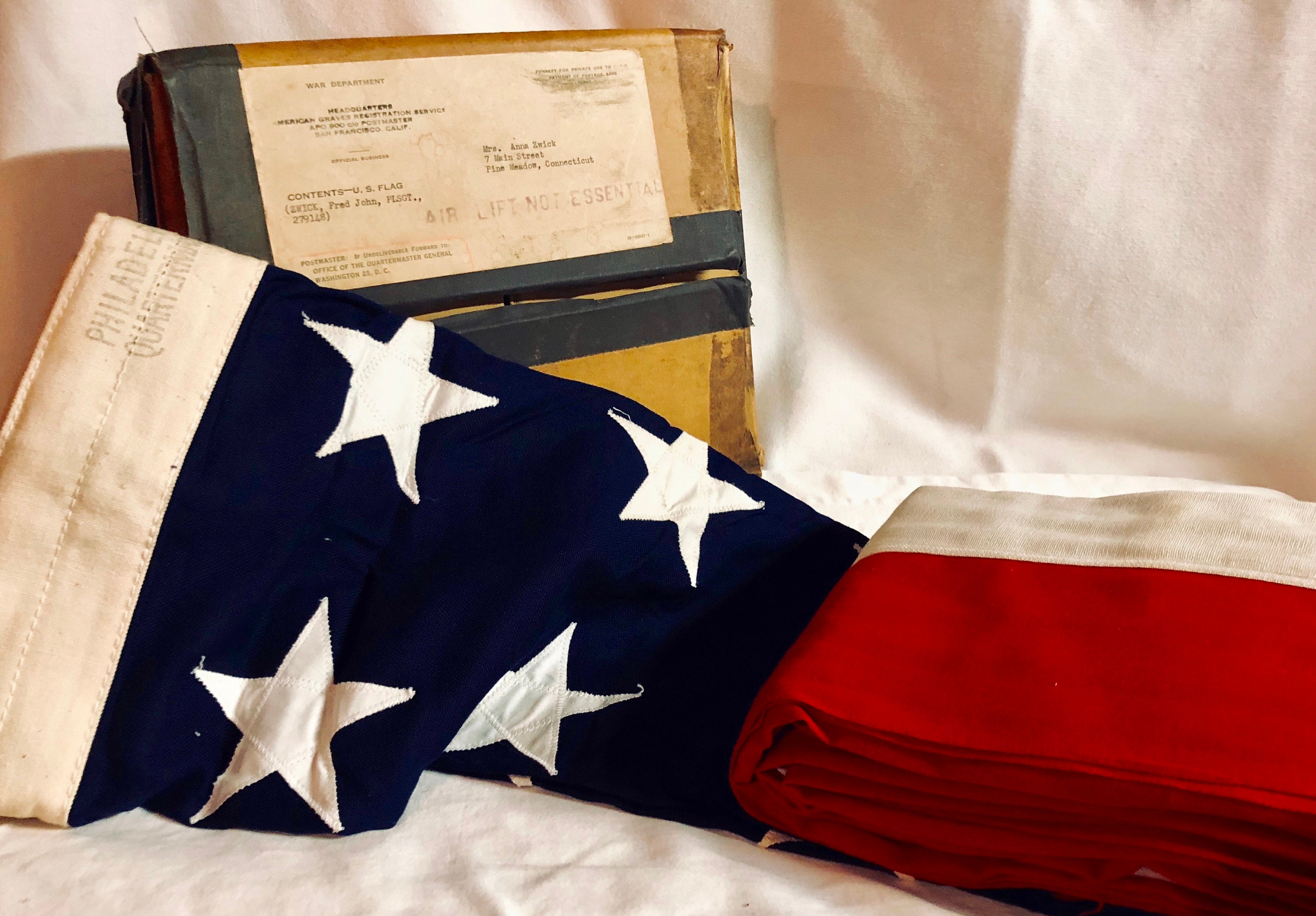 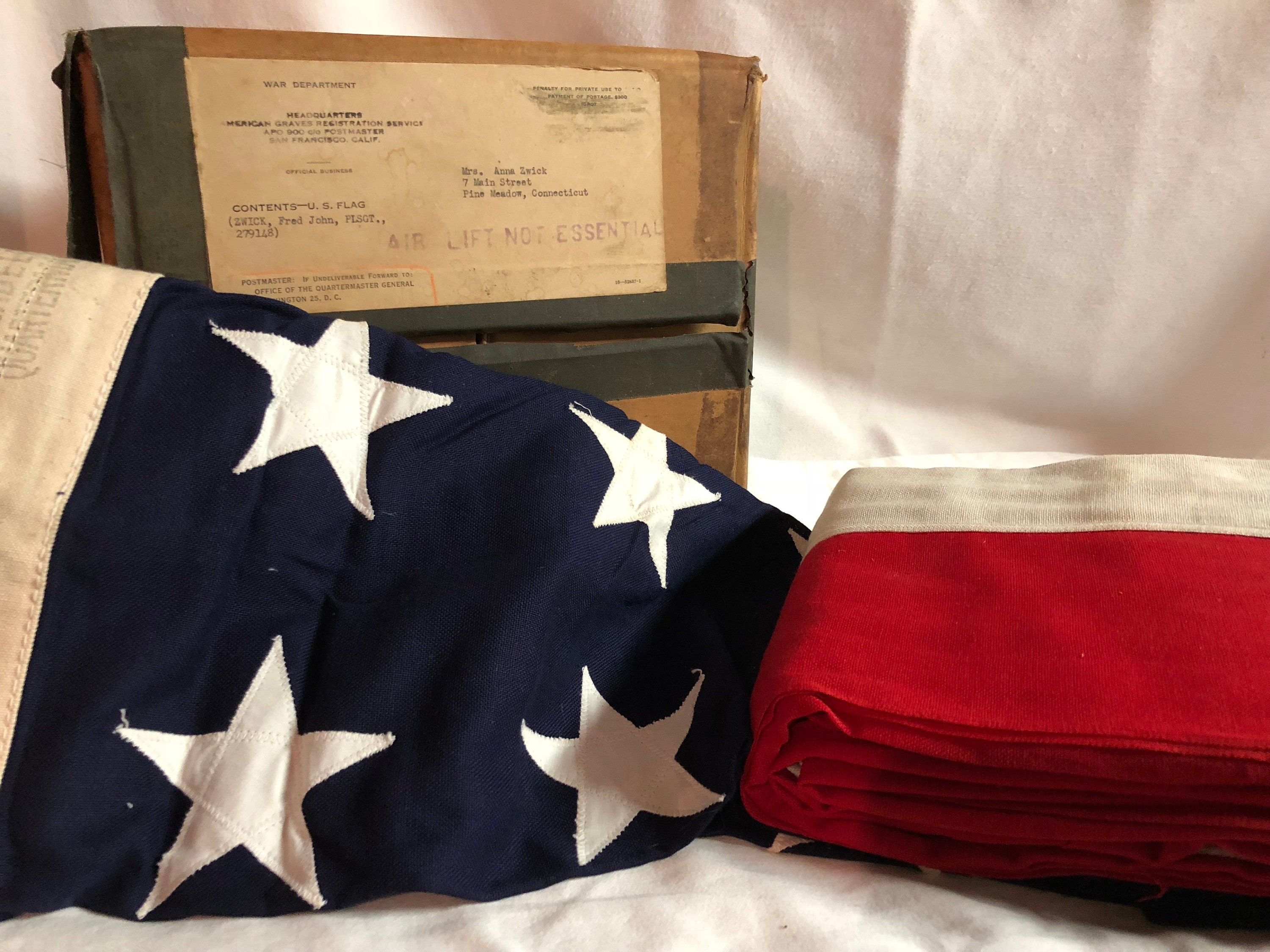 So, I’m an avid antique hunter, scouring estate and tag sales etc… it’s just what I love and do. I happened upon one tag sale and saw a old box. I knew it was old due to the yellowing color and the old tape on the edges. When I looked at it I read “War Department”.

It was addressed to Anna Zwick of Pine Meadow , a historic district in New Hartford,Ct. It also read that it contained a flag for Platoon Sargent Fred Zwick.

I couldn’t believe my eyes!! It could NOT be what was in this box…at a tag sale?!  When I opened the box I expected something else, anything else but what I found was the burial flag of Fred Zwick sent to his mother Anna upon his death. At a tag sale.!! I always say " Ya never know what you'll find"  That's part of the fun. But this?! A mans Burial Flag!? How did it end up here? Was there no family? How could someone sell this? So many questions ran through my head! 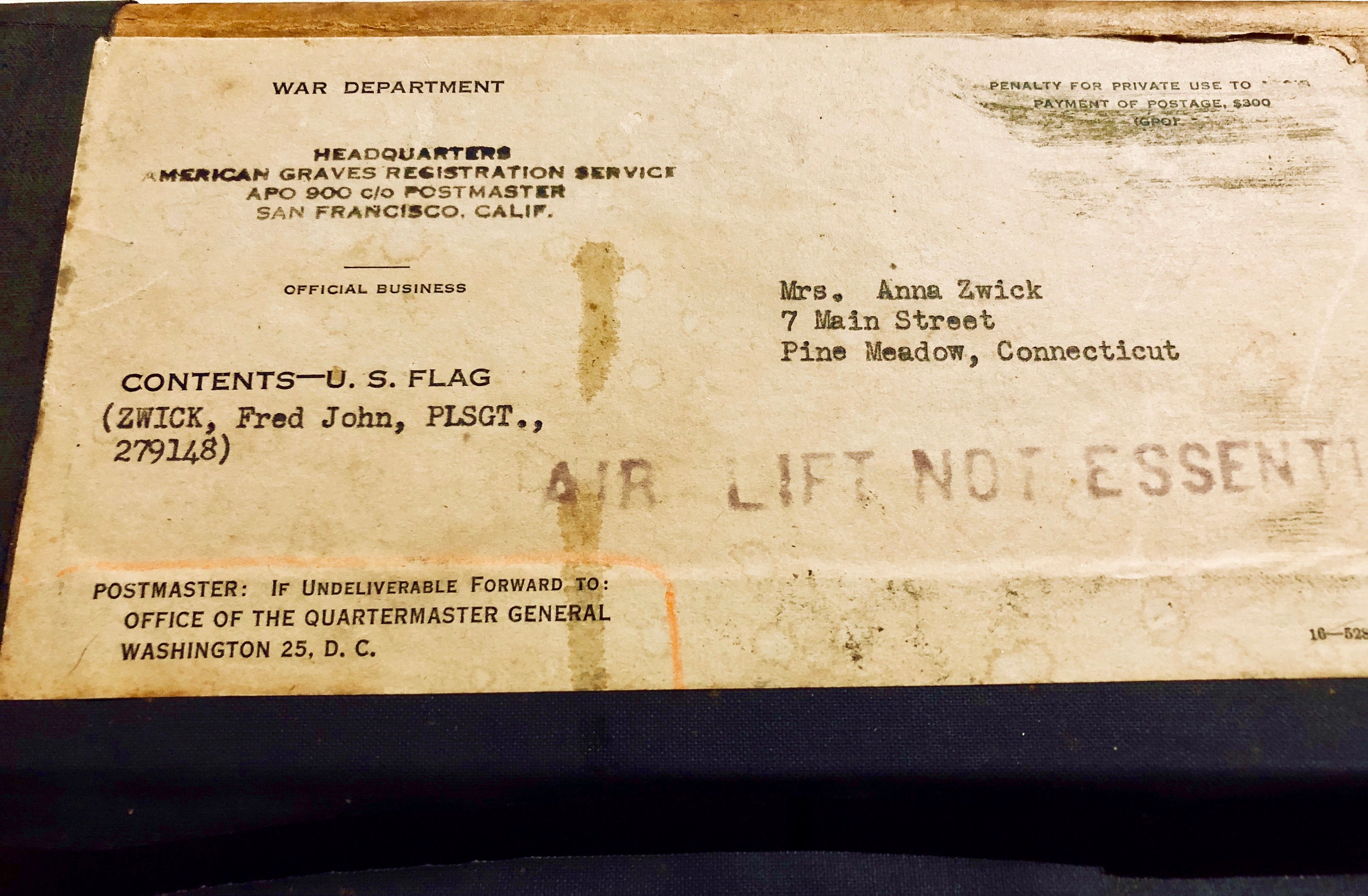 Shocked, amazed ,saddened. I purchased the box and the contents for a mere $25 . I didn’t even haggle. It was worth so much more…priceless really. I needed to save this flag, and the memory of this man from demise no matter the cost. So I did.

Once home, I began to research expecting to find nothing but my curiosity insisted. It became a mission, a passion, a obsession and in some way I adopted Fred as my own. Call me crazy but I could almost feel his presence and gratitude for honoring and remembering him.

I learned that Anna Zwick born in 1890 immigrated to the United States from Austria in 1907. She landed in Holyoke, Mass then to Manchester, Ct and eventually Pine Meadow, Ct in 1923.

She was employed by Cheney Brothers in Manchester then at Landers, Frary and Clark in New Britain,Ct. and eventually during war time at Colt Firearms Manufacturing Company in Hartford,Ct.

In the 1940 census, Anna resided in Pine Meadow with two daughters Clara ,age 30 ,was a sales clerk and Julia, age 21 , a stenographer. Fred in his school days had been a news paper carrier for the Hartford Courant but didn’t show in the household in this census because he went off to join the Marines at the age of 19 in 1939.

Fred served our country during World War 11  and was at Pearl Harbor on December 7, 1941, attached to a ship when the Japanese attacked. He was able to take his first leave  since enlisting shortly after in February 1942. It would be his last time home, the last time his mother would see her only son.

Eight months later he transferred to the Marine Raiders Battalion, Company “O” and fought in the battle at Viru Harbor in the Solomon Islands, one of the toughest battles of the Southwest Pacific.

On the battle field was Father Paul J. Redmond  a beloved chaplain. It was he who read funeral services concluding with the words “You men who have given your lives here in the jungles of Viru were of all races and religions but you were comrades in life, and here in this spot you shall remain comrades. May you rest in peace, you have served your country well. God Bless you”

There was also a famous Marine Raider artist present, Frederick Douglas Greenbowe, sent to depict Father Redmond in the Four Sacraments for the Four Freedoms; Freedom of Speech,Worship,Want, and Fear.

These were goals set forth by President Roosevelt in his January 6,1941 State of the Union Address.

The four paintings were reproduced as prayer cards and more than a million sold during WW11. 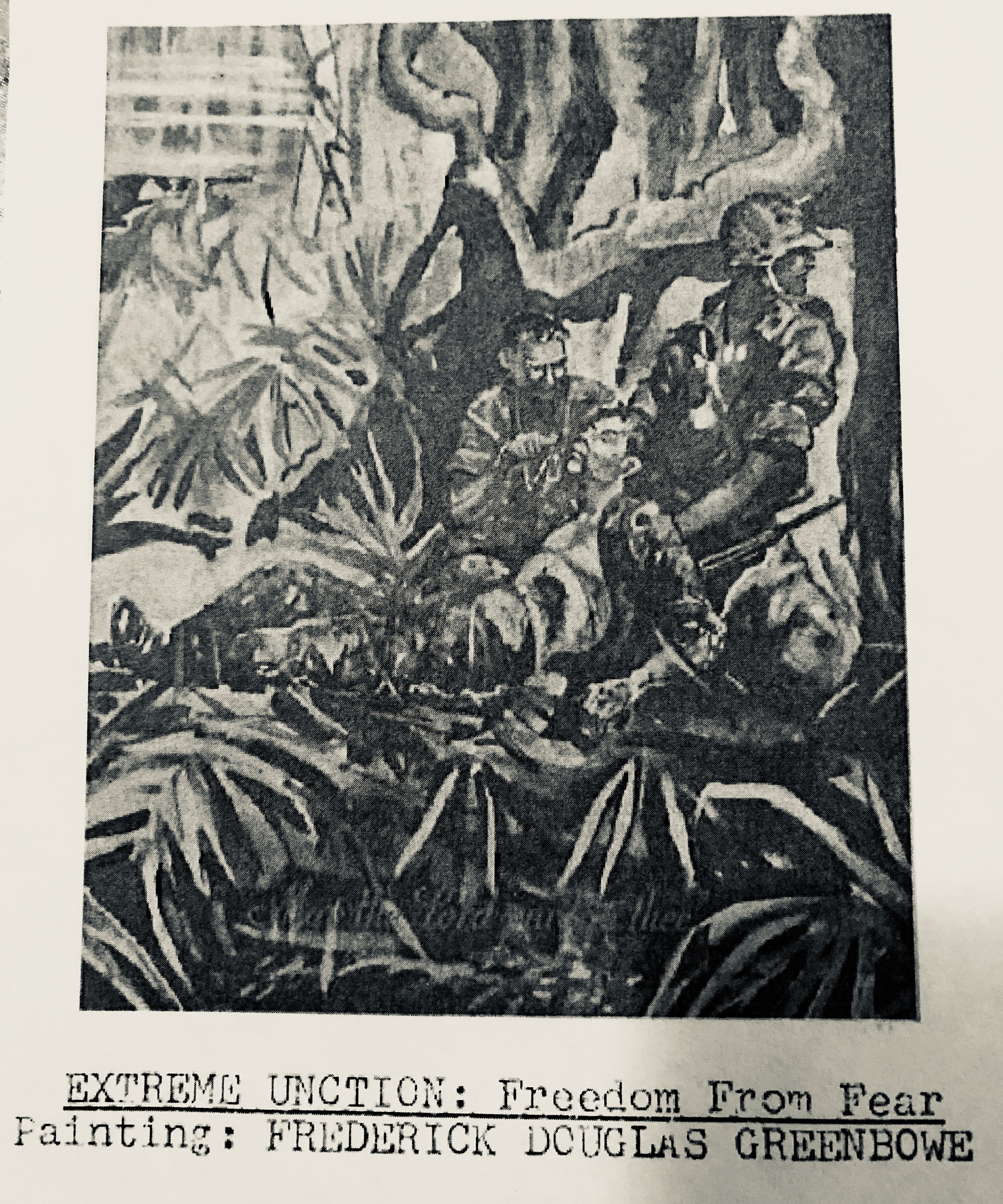 Back home, Anna Zwick received a telegram from the War Department on July 20, 1943 advising her that her only son was killed in action at the age of 21.

She later received his burial flag which seems to have remained as it was sent.

This flag from 1943 has only 48 Stars. I cannot bring myself to take it out and unfold it completley. It remains the same. 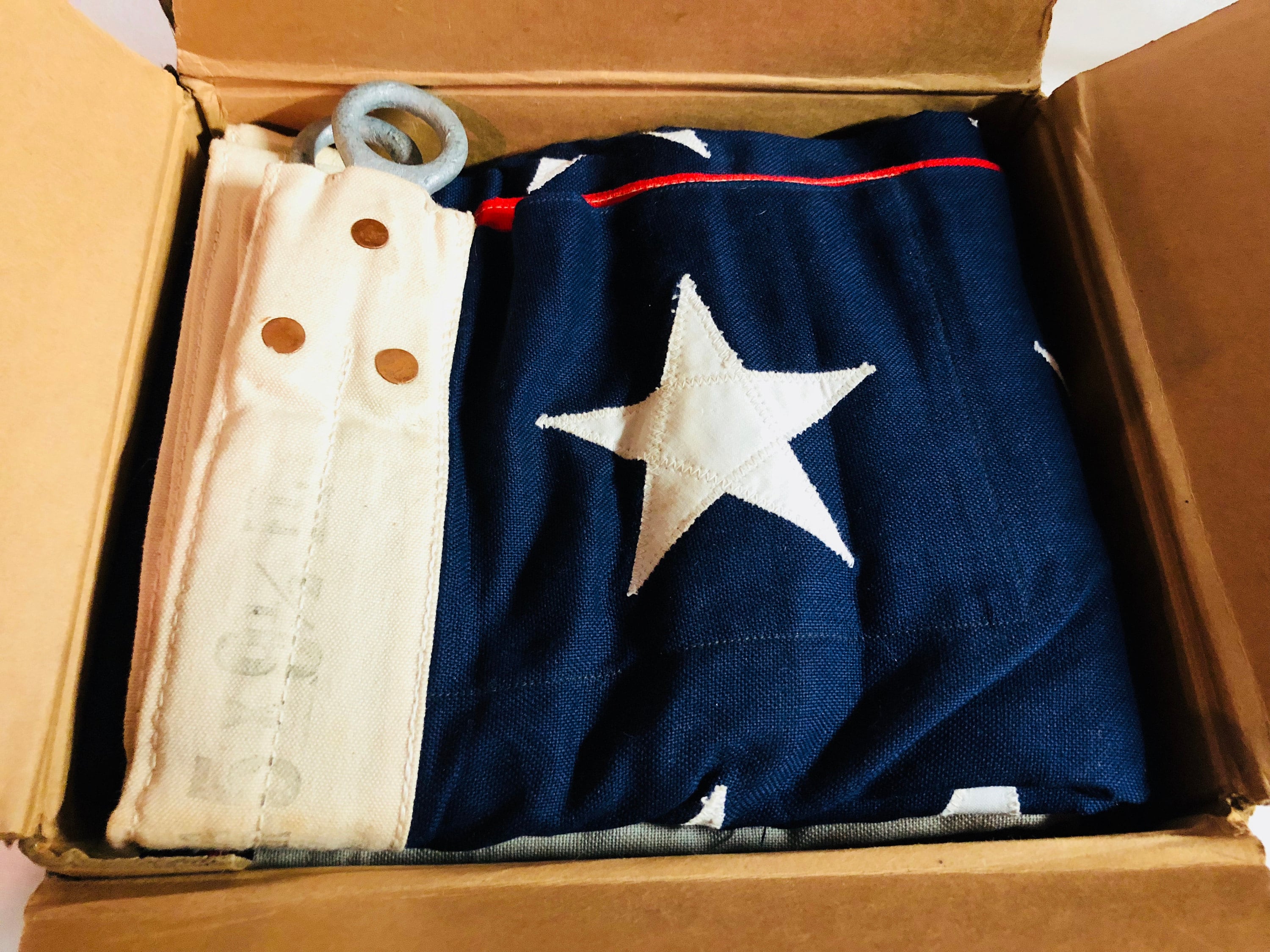 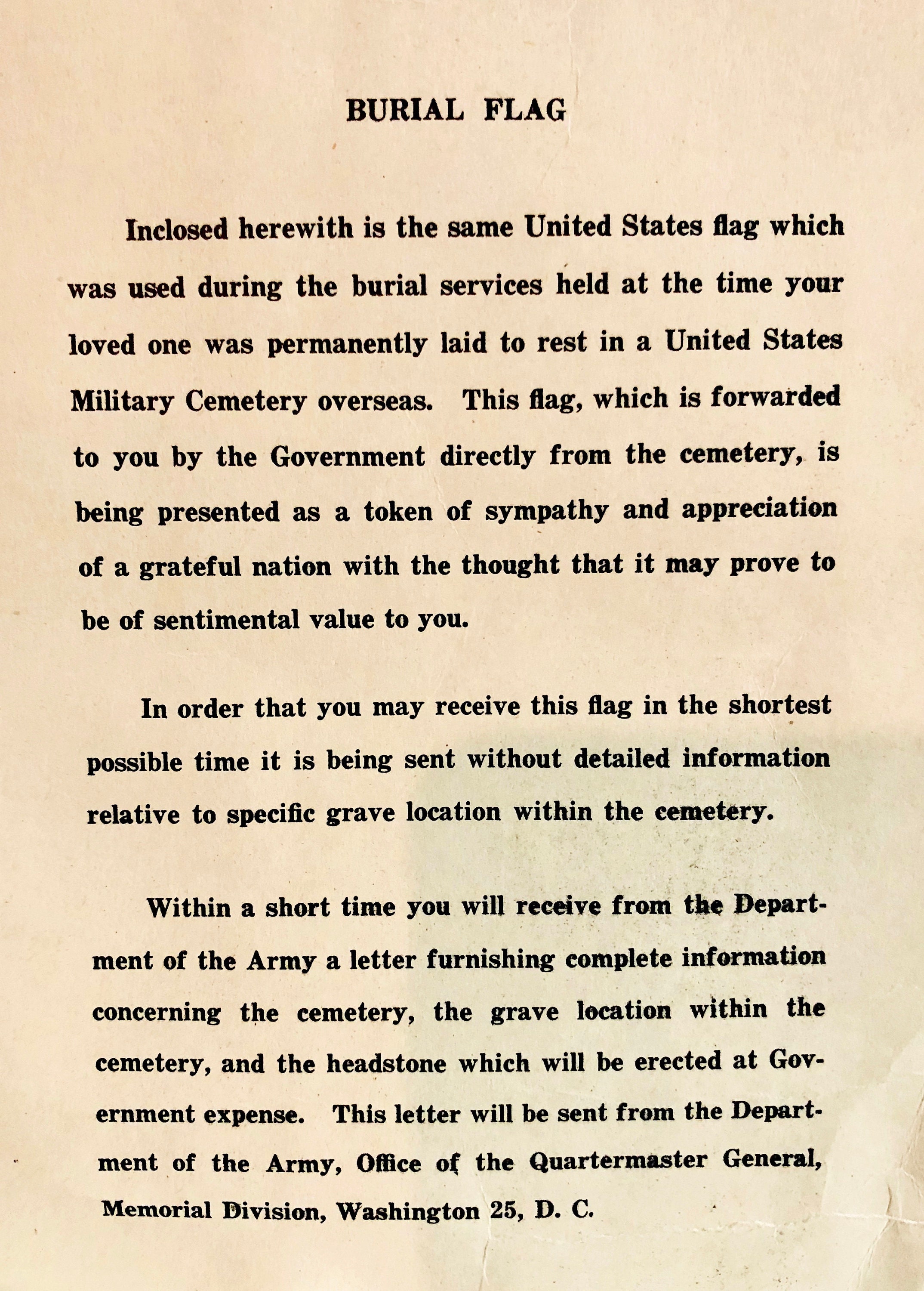 Anna retired in 1957. Spent her last years in a convalescent home and later passed away at the age of 100 in March 1991. She is buried in the Village Cemetery in New Hartford,Ct. I was unable to locate Freds sisters.

This isn't just the story of a old box that contained an American Flag. It is the story and life of just one man. Fred J. Zwick. A man who lived, had a family and fought and died for our country. He is just one of many unsung heros. That gave their lives for our country and our freedoms.

Thank you for taking the time to remember.

In order to continue to honor Fred - It is my plan to donate this flag.

My thoughts are to either give it to  the local historical society in New Hartford,Ct. bringing home a native son or to the USMC Museum in Quantico where Fred can be honored with his comrades. It's even been suggested to bury the flag with his mom,however I'm not sure that's possible.